A Treasury of Hollywood Lettering 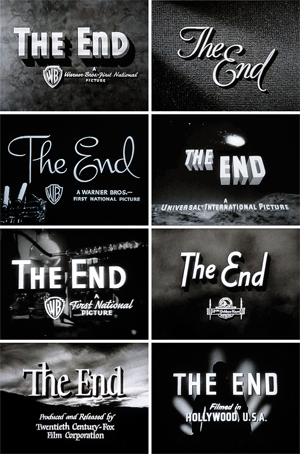 Lettering buffs and cinephiles alike may enjoy this lovely Flickr set containing final frames of classic films. Romantically, these hearken back to an age before typesetting replaced hand-lettering as a matter of convenience, but sociologically they tell another interesting story as well. A movie concluding with “The End,” perhaps followed by a list of its major players, definitively dates a film to before the rise of the unions, which now negotiate on-screen credits for even off-screen contributors. Best Boys and Key Grips are old hat: today it’s Mouse Wranglers and Assistant Caterers who are the little people, along with the occasional Compositing Inferno Artist. (But where are the type designers, hm?) See this fascinating infographic in The New York Times, comparing the length of the credits in Casablanca with those in Lord of the Rings. —JH