If you know Zapf Chancery and Zapf Dingbats, you know the faintest shadow of the work of Hermann Zapf. If you know exquisite mid-century books printed in Palatino, you’re getting closer; I never did, having come of age with the brutish digitization of Palatino that shipped with my first laser printer (along with other notable Zapf faces such as Optima and Melior, both too subtle to survive the barbarity of toner at three hundred dots per inch.) People under the age of fifty likely know Zapf only as a typeface designer, and while a deeper study of his typefaces will lead to such treasures as Hunt Roman and Saphir, even this is only half the story. Zapf is a consummate calligrapher — he has been for eight decades — and he is about to share with the world one of his private treasures.

My introduction to Zapf the calligrapher was Feder und Stichel (Pen and Graver), a monograph of 1950 featuring twenty-five calligraphic studies cut in metal by August Rosenberger. They show not only Zapf’s mastery as a shaper of letters, words, and paragraphs, but a catholic taste for historical forms that live apart from his commercially-produced typefaces. There are rustic capitals that date to the third century, two interpretations of the 16th century Civilité, and a spectacular alphabet of inline Fraktur capitals. Zapf and I have a mutual close friend, who recently mentioned an even more exotic bit of Zapfiana, the sketchbooks that Zapf carried with him after his conscription into the German Army at the outbreak of World War II. Only reproduced in excerpt, and never seen outside of Zapf’s home, it is these that the Kelly-Winterton Press is undertaking to produce in facsimile. 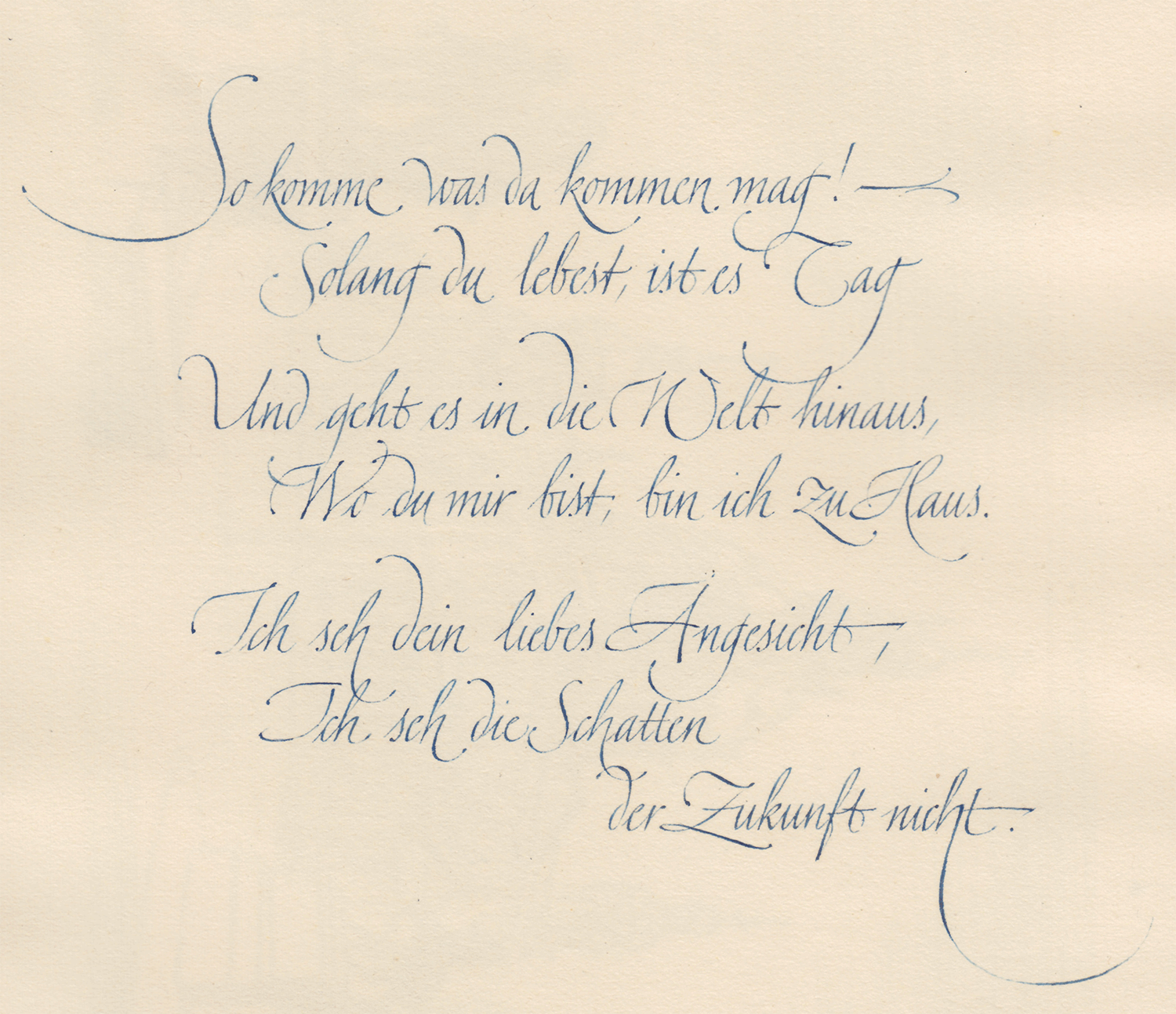 The proper execution of such a project will require an editor with a deep knowledge of letters, a printer intimately familiar with the demands of reproducing complex artwork, someone with long-established relationships in the fine press community, and a designer up to the challenge of presenting this work in an appropriate typographic context. This project has all of these contributors in the form of Jerry Kelly, a designer, printer, and professional calligrapher, who studied under Zapf in 1979. Kelly is a lover of letters: he wrote the introduction to The Art of the Type Specimen in the Twentieth Century (and designed it beautifully using a typeface to which I’d never given a second thought); he designed The Practice of Letters, which presents The Hofer Collection of Writing Manuals from the Harvard College Library, still an indispensable reference on the evolution of letterforms. Books-on-books can sometimes, cruelly, be careless in their details; this will not be such a project. The facsimile edition will cost $65, though a range of deluxe options include such premiums as additional enclosures and fine bindings. I’ll be adding one of these to my bookshelf, and I’d encourage you to do the same, both to encourage the preservation of this important work, and to enjoy the fruits of this wonderful labor of love. —JH

I love Typography (ILT), the world’s favorite fonts and typography blog/ And now you can buy fonts too