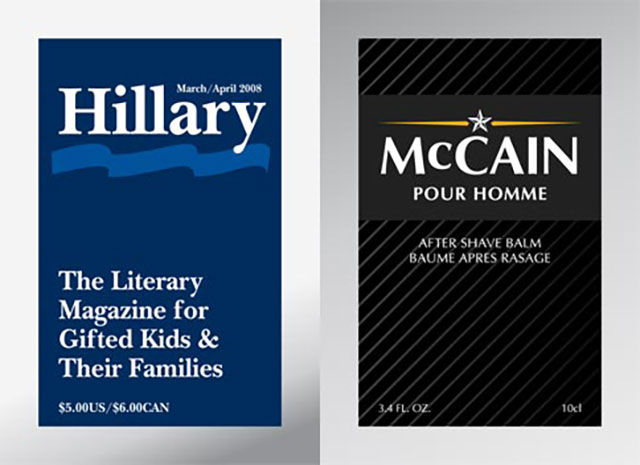 A journalist recently asked what it is about Gotham that we think suits the Obama campaign. We’ll defer to designers John Slabyk and Scott Thomas to make that call — they selected the font for Obama for America, we merely provided it — but one thing we can say as type designers is that Gotham isn’t pretending to be anything it’s not, which makes it an unusual and refreshing choice for a campaign. Political typefaces have a way of being chosen because they underscore (or imagine) some specific aspect of a candidate, working hard to convey “traditional values” or “strength and vigilance,” or any number of graspable populist notions. The only thing Gotham works hard at is being Gotham.

2008 is clearly a year of unusual thinking in political circles, because none of these familiar approaches can explain the utterly confounding typographic dress chosen by Senators Hillary Clinton and John McCain. Hillary’s snooze of a serif might have come off a heart-healthy cereal box, or a mildly embarrassing over-the-counter ointment; if you’re feeling generous you might associate it with a Board of Ed circular, or an obscure academic journal. But Senator McCain’s typeface is positively mystifying: after three decades signifying a very down-market notion of luxe, this particular sans serif has settled into being the font of choice for the hygiene aisle. One of McCain’s campaign themes is “Making Tough Choices:” is this the one you would have made? —JH