Data Visualization of the Day 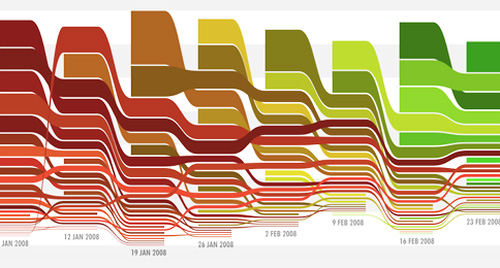 Jason Kottke turned me on to this fantastic data visualization by Zach Beane, showing this year’s box office gross for American movies. Like this related graphic at The New York Times, it uses the x-axis for time and the height of each node to indicate revenue, but presents the data in a way that allows readers to infer four additional kinds of information — without having to complicate the graphic:

The position on the y-axis represents each film’s rank, revealing the importance of a strong opening weekend (but begging the question of how The Bucket List, which opened in 23rd place, became the #1 movie in America the following week; something to do with New Year’s Day?) The slope of each line conveys the distinction between films with a slow burn (Juno) and those that flamed out (Cloverfield.) Beane makes a rare and non-gratuitous use of color to distinguish individual data lines, where the occasional dissonance identifies films with box office longevity: the thread of mint green running through the purple of early May highlights the inexplicable endurance of Horton Hears a Who. And the height of the y-axis overall charts seasonal trends in the industry at large, confirming that July is considerably more important than April.

Finally, I appreciate the way Beane used rollovers to reveal the names of the films themselves. A lesser designer would have given this information primacy, but Beane recognized that the titles, while crucial, are not the story themselves. Isn’t it nice when a bold decision is demonstrably the right one? —JH

The Smallest Letter in the World

The Alphabet: A Dramatic Reading