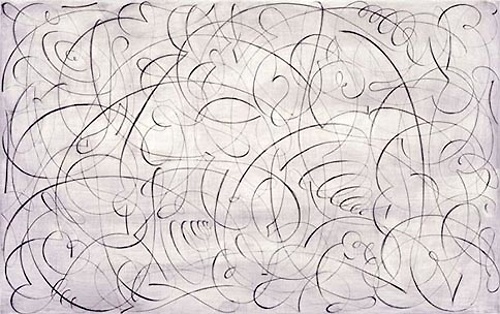 If you suspect that my typographic leanings affect my taste for other visual arts, it will come as no surprise to learn how much I love the work of Elliott Puckette. There’s a show of her recent work at Paul Kasmin Gallery in New York, which runs through February 23: do not miss it.

An interesting counterpoint to the works themselves is Judith Goldman’s interview with the artist, published in the exhibition catalog. Puckette counts Oleg Grabar’s study of Islamic calligraphy among her influences, along with the asemic writing of artists such as Henri Michaux. She mentions other influences that are further afield, and less directly evident in her work: the physiognomical portraits of Johann Caspar Lavater, the Celestial Alphabet, and the Walam Olum, among others. But most striking to me was this comment, in which Puckette describes how she began using a razor as a tool:

I warmed up to it slowly. I was looking at penmanship books and doing paintings of the letter O and A, and I thought about making the image negative by painting around it…. I thought, if I scratch it out, that would be easier, and I’d get there faster. Cutting and scratching was a way to slow the line down. In the end it wasn’t about adding; it was about subtracting.

What’s remarkable is that this is exactly how typefaces are designed: not by constructing letterforms in black, but by drawing counters in white. That Puckette chose an implement for stripping away, rather than building up, is also fascinating: files and gravers, the traditional tools of typemaking, are tools for creating whitespace. (Their profound affect on type design, which cannot be underestimated, is the central thesis of Fred Smeijers’ excellent Counterpunch.) I can’t help but wonder what a Puckette-designed typeface might look like; perhaps we’ll someday find out? —JH

A Font Tip for Leopard Users

The Smallest Letter in the World

On the Death and 441-Year Life of the Pixel