GARTER BELTS, THEN AND NOW

Compare this picture of a garter belt by Olivia de Berardinis… 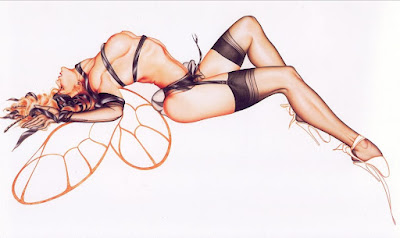 …with this one by John Sloan:

Why is the Sloan illustration more suggestive and provocative?  What makes it a more successful work of art?

In Sloan’s picture, a random updraft reveals a small, brief glimpse of thigh in an otherwise cold, impersonal sea of travelers bundled in winter coats.  Look at the narratives that radiate from those few inches of flesh:  Only one person (presumably Sloan) among hundreds is positioned to witness this unexpected gift: 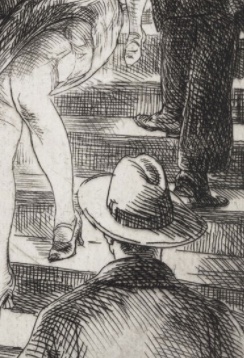 The experience clearly left an impression on him.

The woman catches him looking: 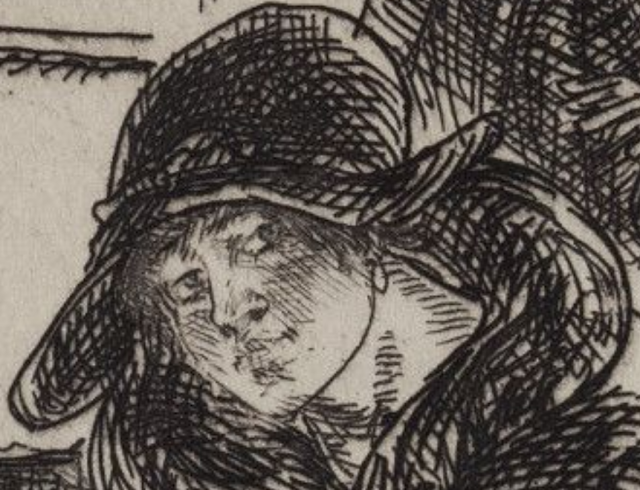 Is he embarrassed?  Does he avert his eyes?  What is she thinking?  She can’t hold down her dress because her arms are full.  Does propriety even matter any more if they’re anonymous ships passing in the night?  Her face, her exposed thigh and the back of the man’s head form a narrative triangle here.  It took Sloan seven versions of this drawing before he felt he got the balance just right.

Olivia’s fantasy trambo, on the other hand, has no such narratives.  She’s too one-dimensional to contain penetralium.

Amorous pictures today have become fairly predictable, even from masters of the skill such as Frank Cho or Adam Hughes.  We see the same routine provocative poses with the same anatomical distortions.  We see nudity, or at least an abundance of flesh, drawn with the same smooth, rounded lines.  We see soft, blended colors.  When censorship disappeared and printing quality improved, the same formulas became more and more entrenched.

But 100 years ago, artists working with far less freedom and more primitive tools created pictures that were more intense than much of what is produced today.  Creativity, like passion, often comes from constrained circumstances.

For example, etchings– an inky black medium full of smudges and scratchy lines– could be quite steamy, especially capturing moments of passion in a gritty, urban world. 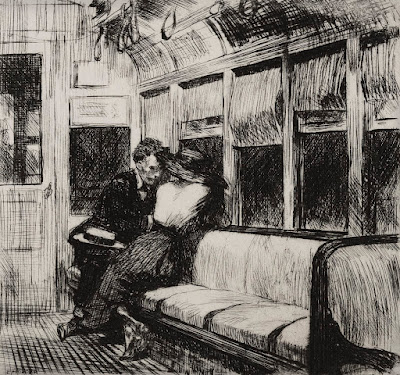 Edward Hopper (above) and John Sloan (below) show us couples grasping for intimacy in a crowded city.  These drawings capture serious moments that we know were preceded by hours of anticipation and followed by hours of reflection. 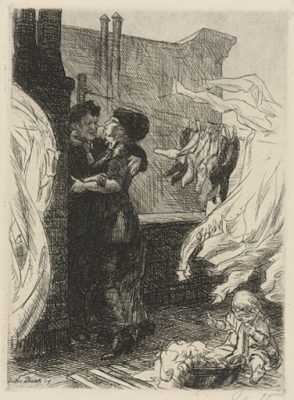 In Sloan’s etching, Turning Out The Light, we see a woman preparing to remove her nightgown but simultaneously turning out the light.  There will be no unearned intimacy for us here; our imaginations will have to work for it.  But these are figures with real humanity, and the expression on her face as she looks over her shoulder at her partner shows us that there is another worthwhile narrative taking place. 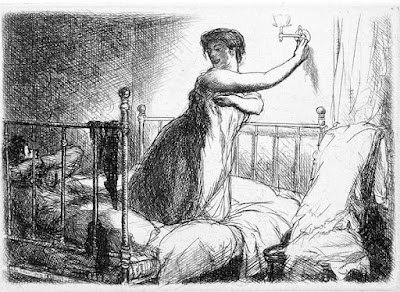 This last etching by Hopper, Evening Wind, is a sensuous tour de force.  Once again an errant breeze plays a central role. 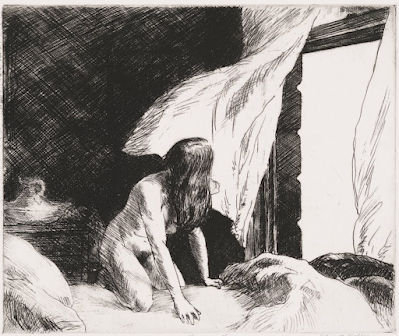 This time it brings relief from the heat of the city in an era before air conditioning.  Hopper didn’t need spandex or corsets or stiletto heels.  He didn’t need huge breasts.  His evocation of the sweetness of sticky summer sweat is enough to demonstrate the difference between a real artist and amateurs.