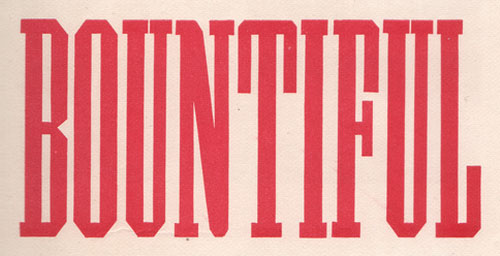 I thought I’d bid farewell to H&Co Greek Week with a glimpse inside some of our library’s more exotic type specimens. After the jump, some stellar Grecian typefaces which have yet to be properly revived, and the type specimen books in which they’re showcased so well.

The above is unusual: it’s the 10-Line Grecian Double Extra Condensed of William Page (1872), and eagle-eyed readers may have noticed that it’s printed not in black and white, but in retina-searing magenta. Why? It’s because this specimen, the rare Wm. H. Page & Co. Wood Type of 1872, was a joint venture to promote both wood type made by Page, and printing inks made by H. D. Wade & Co. of New York. Even at the age of 135, the book’s colors are alarmingly bright and rich, doubtless because they contain unlawfully toxic levels of cadmium and other heavy metals. 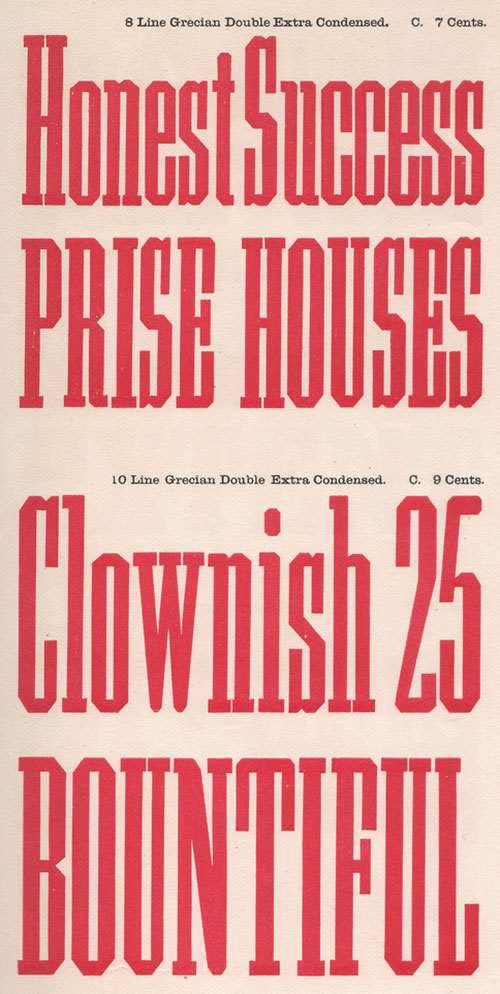 Above, the expanded showing of Page’s Grecian Double Extra Condensed in the 8-line and 10-line sizes (“line” essentially translates as “pica.”) The different shapes of the capital and lowercase S are interesting: the diagonal spine in the lowercase is attractive and legible, but it’s the horizontal form that’s survived, probably because it’s more successful in other weights and widths. The top of the lowercase t, and the dot of the lowercase i, seem over-bevelled; the question of how many times you apply the process is one that plagues many Grecians, as we’ll see below. Note also that whoever composed these pages chose sample words with no descenders, a sneaky way of making the settings as dense as possible. 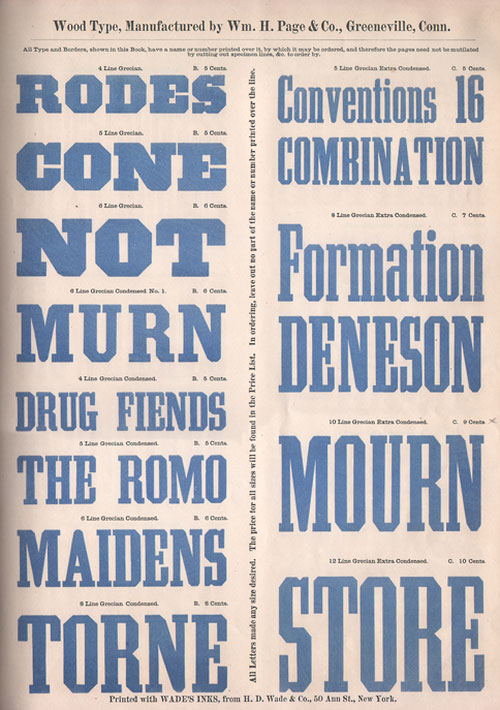 More from the Page company, showing Grecians in a range of different proportions. The different treatments of the serifs on the arm of the capital E reveals different approaches in the execution of the style, its length and thickness varying from size to size. At top left are three beefy designs simply called Grecian; it’s on these that our Acropolis font is based. The fourth line, showing the Grecian Condensed No. 1 typeface, has extra bevels on the interiors of the cap R and U — again, raising the question of how far to take the theme. To my eyes, these additional lines compromise the style rather than reinforcing it: it’s the tension between a square inside and an octagonal outside that gives the style vigor. 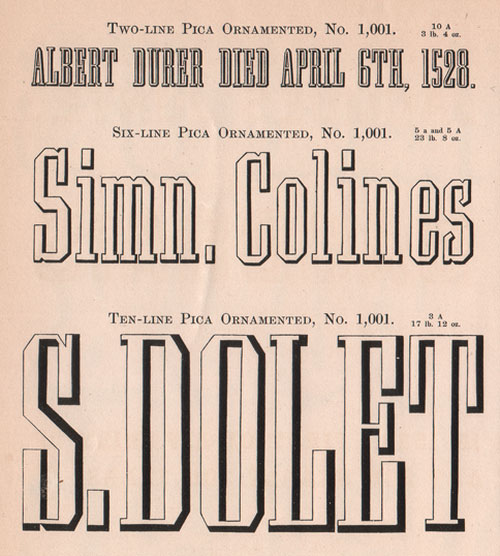 George Bruce was a prolific American typefounder, and the firm directed by his heirs produced in 1876 an epic type specimen book that’s the size of the New York Yellow Pages. This is the Ornamented No. 1,001 that appeared in the Specimen of George Bruce’s Son & Co., which reimagines the Grecian as the shadow of some other form — not unlike the Thorowgood italic that I posted on Monday. In American Wood Type, 1828-1900, Rob Roy Kelly shows an earlier face after which this one was probably patterned, a wood type made by Wells & Webb in 1846. (Bruce’s faces were metal.)

Interesting details include the capital S in the largest size, in which the attachment of the serifs shows two different approaches (antique upstairs, mod downstairs.) Also note the lowercase s at the end of the second line, whose serifs just don’t know when to stop turning. Again the question of how far to take the theme; I think that s takes it too far.

The Grecian style was essentially an American invention, but within two years of its arrival, European typefounders were producing Grecians as well. Identified only as No. 1229, this is a typeface from the French typefoundry of Peignot, as it appeared in their Lettres Fantaises of 1896. Most of the typefaces in this specimen book are in different fin-de-siecle styles: by 1896, the Grecian style was already 55 years old, and long out of fashion. Peignot seems to have attempted to reinvigorate the style with an unusual side shadow, a tradition from sign writing rather than typefounding. This subtle detail transplants the design from a world of gunslingers and railroad tycoons to one of music halls and absinthe drinkers. 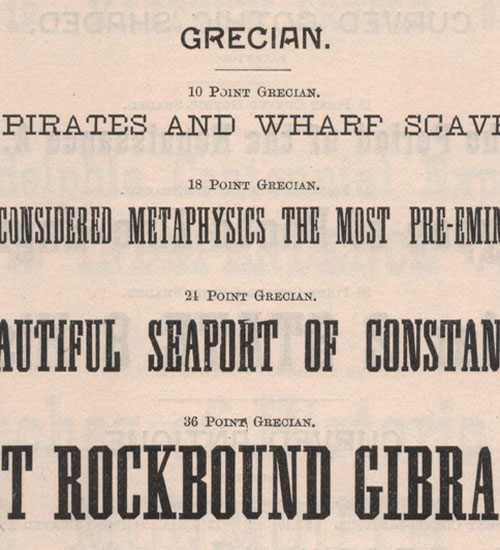 In the nineteenth century, James Conner was known as an adroit businessman, but today we’d call him a pirate. His firm engaged the engineer William Starr to devise a process known as “electrotyping,” by which fonts of lead type could be purchased from type foundries, and then subjected to chemical electroplating in order to produce brass negatives, from which additional lead type could be cast. As a result, the 1876 Compact Specimens of James Conner’s Sons features an incredible assortment of typefaces from an unknown number of authors, including this accumulation of unrelated Grecians organized under a single heading. The ten point design shown here, obviously unconnected with its neighbors, presumably came from a different source. But it’s an interesting caricurature of the truism that in order for a font to be legible, it must get wider as it gets smaller. — JH

10 Years of Fonts In Use