His Name Was Almost Legion 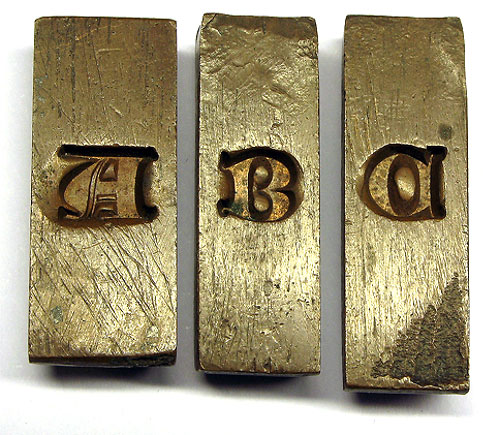 James Mosley shared with me this striking photograph of some of the world’s oldest type-making material. These brass matrices, made by a Dutch punchcutter in 1508, are now in the collection of the Enschedé Museum in Haarlem. It’s remarkable that they’ve survived long enough to celebrate their 500th birthday.

Especially enthusiastic type buffs might recognize these as the Great Primer Uncials that we adapted for our Historical Allsorts collection, but even the most devoted connoisseur is unlikely to know the name of the man behind them. It’s amazing that we don’t, given his significance: historian H. D. L. Vervliet identifies an entire historical period with the designer’s name alone, noting that as many as half of all books printed in Holland in the first half of the sixteenth century featured this one man’s typefaces. This was an extraordinary achievement for a man less famous than his contemporaries Garamond, Granjon or Plantin, so we have to ask — doing our best Graham Chapman impression — why is it that the world has forgotten the name of Henric Pieterszoon Lettersnijder?

The polysyllabic moniker couldn’t have helped, any more than it helped save the two other typographic Lettersnijders from obscurity (it’s not a last name, but rather an appellation meaning ‘letter-cutter’), though Henric Pieterszoon was likely a victim of the style in which he worked. Typography confers immortality upon those whose designs are successfully adapted by others, and enduring names such as “Garamond” are known to us thanks to an unbroken chain of homages — concluding finally in a century’s worth of historical revivals that populate our font menus. Whatever their aesthetic virtues, what most immediately qualified Garamond’s types for revival was their familiarity: the Garamonds we know today are romans and italics, two universal species of letter in which Henric Pieterszoon Lettersnijder never worked.

The styles for which Lettersnijder was best known were a textura of the Northern European style, and these marvelous uncials. Uncials are rounded Gothic letters of Lombardic origin, used mainly for initials, and Lettersnijder’s uncials are of a Germanic strain identifiable by the knobby serif endings that Vervliet colorfully calls “poodle’s paws.” After dominating typography for half a century, Lettersnijder’s designs began to fade from view only when the types themselves began to physically deteriorate, but ultimately it was the ascendancy of humanism that drove all of the gothic styles from favor. Gothic types appeared in nearly every book printed at the beginning of the sixteenth century, but almost none of those printed at the end. In the twenty-first century, texturas and uncials live on as interesting typographic curios, trotted out for newspaper flags, diplomas, and other special occasions. A “happy 500th birthday” card would surely qualify. —JH

“Someone Found a Letter You Drew Me, On the Radio…”

Oakleaf: Behind the Scenes