Letterror at the Graphic Design Museum 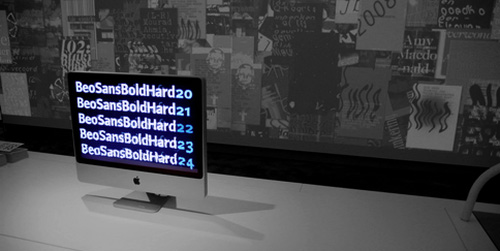 When we first met at the ATypI conference in 1989, Erik van Blokland, Just van Rossum and I were branded the “young turks” of typography, presumably because we were fifteen years younger than ATypI’s next-youngest member. Erik and Just were already notorious for their Beowolf project, which hacked the PostScript format in order to produce self-randomizing letterforms; this mischievous bit of culture jamming was enough to endear them to me, and to a generation of designers who have followed their work ever since.

Beowolf (and its sister font, BeoSans) are now an established part of typographic lore, and both rightfully received attention in the opening exhibit of the world’s first Graphic Design Museum in Breda. The place is swimming in typography (like the Netherlands in general), but it’s especially gratifying to see that in this new installation, visitors can experience BeoSans’ two-dimensional letterforms with the benefit of the fourth dimension as well. The addition of a timeline makes the faces’ randomness seem as natural an attribute as size, color, weight, or width, hinting at a future in which our screen-driven civilization could come to regard mutability as an integral part of the typographic experience. As always, I’m curious to see where Erik and Just’s original thinking will ultimately take us. —JH

Our Favorite Typefaces of 2019 – Typographica