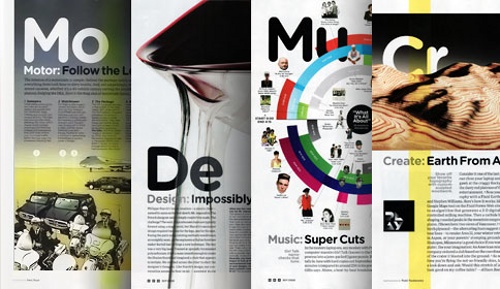 In the year and change since we released the Gotham Rounded family, I’ve noticed an unusual paradox at play. Some designers choose the fonts because of their high-tech associations, and can coax out of them an “engineered” quality that evokes the engraved markings on keyboards and camera lenses (both prime ingredients in Gotham Rounded’s design.) Others choose the fonts because they’re friendly, and use them to achieve a playful tone that’s somewhere between a kids’ science book and a Japanese synthpop single. But every once in a while, someone chooses the fonts for both reasons, finding a way to reconcile these seemingly contrary intentions in a single piece of design. Scott Dadich, the Creative Director of Wired, has a knack for making type do two things at once, but only when he’s not making it do twelve things at once. (He’s one of those publication designers who makes me glad I stuck with type design.) Together with his dream team, designers Wyatt Mitchell, Margaret Swart, and Christy Sheppard, Scott introduces in the September issue of Wired a redesign that features Gotham Rounded, in what I think is an incredibly smart application.

The magazine’s Play section, once home to gadgets and new technology, now exhibits more of the broadly philosophical thinking that distinguishes the very intriguing Wired of the 21st century. The addition of Gotham Rounded is just part of a design strategy designed to give the section a more distinct voice and a clearer point of view: another smart device is the yellow “progress bar” that tracks the movement of the section, and makes for some marvelous visual serendipity when it intersects both type and image. But positively brilliant are the dominating initials that form a sort of periodic table of themes: a general topic is abstracted from each article, which is represented by a two-letter abbreviation, which signals the nature of the writing to follow. It’s a very clever way of reinforcing the magazine’s editorial range — and reminding readers that Wired is not about things but about ideas — and it excitingly builds anticipation for next month’s issue: will it cover these same topics? New ones? It’s one of the most striking and original solutions I’ve ever seen for building a genuine section-within-a-section, a daunting challenge for any magazine. Wired achieves it with spectacular success. —JH

His Name Was Almost Legion