Oakleaf: Behind the Scenes 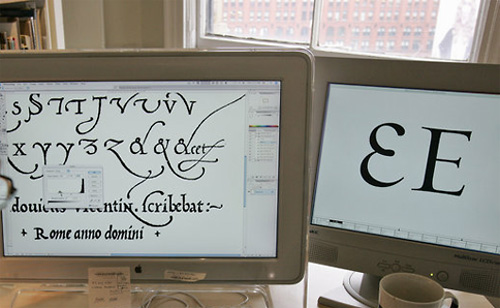 The typeface we designed for The Nature Conservancy is an extension of our Requiem font, which explores the work of sixteenth century scribe Ludovico Vicentino degli Arrighi (1480–1527). Arrighi is best remembered as an exemplar of the written italic, but his upright roman capitals capture an interesting balance of calligraphic and typographic traditions. The three variations of the capital T on the left offer different ways of reconciling the influences of the seriffed inscriptional letter and the swashed written one, and it was this kind of tension that we hoped to explore further. On the left screen is an enlargement from Arrighi’s 1523 writing manual Il Modo de Temperare le Penne, and on the right are two variations of the capital E in the font we designed. The cursive form on the left was one of the first digital drawings made by designer Andy Clymer, and we all thought it was immediately successful. In the final font, it’s almost perfectly preserved from this initial stage. 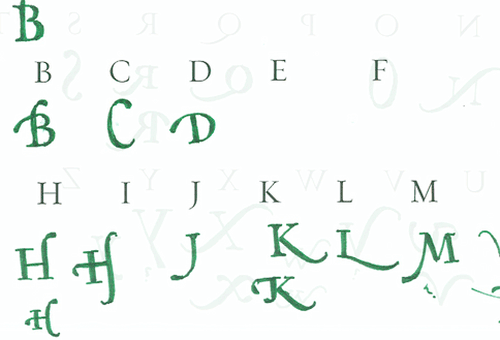 Fonts whose designs pose a lot of stuctural questions usually start with a lot of sketching. We don’t tend to devote much time to the details at this stage, instead focussing on the overall gestures that will suggest the form that the letters will ultimately follow. Above are some of Andy’s early sketches for the font, which are beginning to grapple with the same question Arrighi faced: which part of a letter can best support a decorative flourish? The three designs for the H at the lower left all echo historical examples that we found, reproduced in Kathryn Atkins’ Masters of the Italic Letter and Oscar Ogg’s Three Classics of Italian Calligraphy, two indispensable surveys of renaissance calligraphy.

Calligraphers have the advantage of creating letterforms that need only work in one situation, but a character in a font must anticipate every possible neighbor. A long-tailed K may run into a capital J or Q later in the word, or any lowercase letter with a descender. These are some of Jonathan’s early sketches that begin to consider the implications of letters as ingredients in words. At the top right are three constructions for the capital V, each of which is plausible on its own, but not necessarily in combination with other characters. 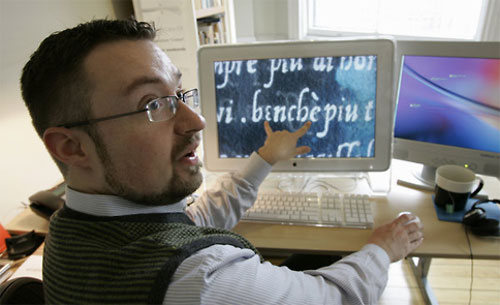 This page is from the first round of proofs of the new typeface. At this point we’re starting to evaluate more local details like the form and balance of each character, as well as how it gets along with its neighbors, and we’re starting to think more concretely about rules for the behavior of the font: when should each version of each character put in an appearance? Inevitably at this stage, we start to question some fundamental things about the design, such as its color or its proportions. One of the crucial purposes of this proof was to help evaulate the fit of the design: whether it was uniformly too tight, or too loose. 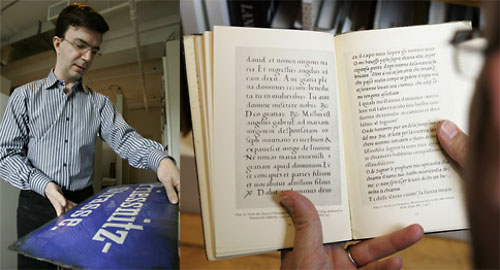 Arrighi made letters not only with the pen and the graver, but with the punch: this is an example of Arrighi’s first italic printing type, as it appeared in the Epistola de la Lettere Nuovamente of 1529. While Jonathan appears here to be throwing up a gang sign (Westside Kerning Lords; represent), he’s in fact pointing out an unusual feature of this typeface: what appear to be two different forms of the lowercase e in the same word. The first is actually a Greek epsilon, for the Epistola was a letter from Giovanni Giorgio Trissino to Pope Clement VII, advocating an orthographic reform of the Italian language, including the addition of the Greek omega and epsilon to the Latin alphabet. Some of his more successful ideas were the replacement of the consonental i and u with visually distinctive forms, which we know today as the letters j and v. 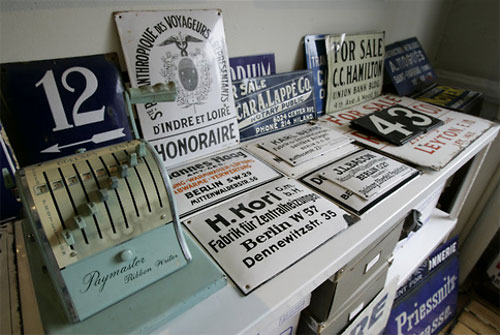 Even in the development of a typeface that has specific roots in the history of printing, we try not to be prejudiced towards ideas from other media. Books make up the core of our studio’s reference library, but a growing collection of other kinds of lettered artifacts offer different ways of thinking about typeface design that can often be instructive. At left is Tobias with a recent highlight from his ever-expanding collection of antique enamel signs. (This particular sign didn’t play a part in the Oakleaf project, but photographers can’t resist them any more than we can.) Below are just a few of the other signs in the collection, many of which will be getting their own close-ups in future posts. Eagle-eyed readers may in the meantime notice connections between some of the signs below and our drawings for the Depot and Strasse fonts. —JH

A Treasury of Wood Type Online