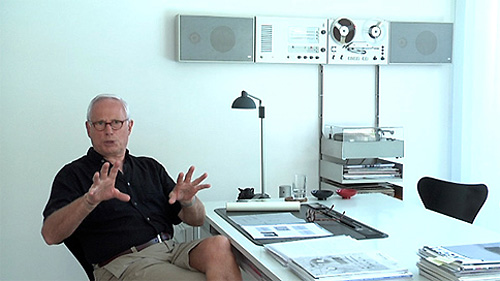 Ever since director Gary Hustwit invited me to appear in his film Helvetica, life has changed for me in two ways. First, I get recognized on the street from time to time (always with the implied aren’t you that type dork) — but second, and more rewardingly, I periodically find myself sitting on a panel with the director. It was at just such an event last autumn that Gary mentioned his new project, a documentary about industrial design. It shouldn’t have come as a surprise: earlier in the evening, our conversation had touched upon a mutual appreciation of the IWC Portuguese wristwatch and the Porsche 356 Speedster. But I was thrilled and delighted nonetheless, and have been looking forward to the project ever since. The film is Objectified, its website is up, and I am counting down the days until its 2009 premiere.

I’ve always loved industrial design, but I don’t think I’d measured the depth of my affection until I took a spin through the movie’s production stills. I knew I could look forward to hearing more from Marc Newson and Apple’s Jonathan Ive, but I hadn’t anticipated so many other wonderful participants: Hella Jongerius is featured, whose work I’ve always found brilliant, witty and uplifting, and I’m especially looking forward to the segment featuring Dieter Rams, chief of design at Braun from 1961 to 1995. Beyond being one of the most influential designers in the history of his craft, Rams is simply a cool cat: that’s him above, with what looks to be his 606 Universal Shelving System, and a modular hi-fi that I physically crave. Look at it: it’s smart, stylish, functional, and badass; it’s the Steve McQueen of audio equipment. And it’s just the beginning. —JH