On the Death and 441-Year Life of the Pixel 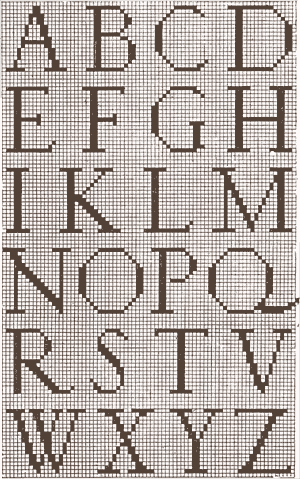 The struggle to adequately render letterforms on a pixel grid is a familiar one, and an ancient one as well: this bitmap alphabet is from La Vera Perfettione del Disegno di varie sorte di ricami, an embroidery guide by Giovanni Ostaus published in 1567.

Renaissance ‘lace books’ have much to offer the modern digital designer, who also faces the challenge of portraying clear and replicable images in a constrained environment. Ostaus’s alphabet follows the cardinal rule of bitmaps, which is to always reckon the height of a capital letter on an odd number of pixels. (Try drawing a capital E on both a 5×5 grid and a 6×6, and you'll see.) Ostaus ignored the second rule, however, which is “leave space for descenders.”

I’d planned to introduce this item with a snappy headline that juxtaposed the old and the new — for your sixteenth-century Nintendo! — before reflecting on the pixel’s moribund existence. Pixels were the stuff of my first computer, which strained to show 137 of them in a square inch; my latest cellphone manages 32,562 in this same space, and has 65,000 colors to choose from, not eight. Its smooth anti-aliased type helps conceal the underlying matrix of pixels, which are nearly as invisible as the grains of silver halide on a piece of film. And its user interface reinforces this illusion using a trick borrowed from Hollywood: it keeps the type moving as much as possible.

Crisp cellphone screens aren’t the end of the story. There are already sharper displays on handheld remote controls and consumer-grade cameras, and monitors supporting the tremendous WQUXGA resolution of 3840×2400 are making their way from medical labs to living rooms. The pixel will never go away entirely, but its finite universe of digital watches and winking highway signs is contracting fast. It’s likely that the pixel’s final and most enduring role will be a shabby one, serving as an out-of-touch visual cliché to connote “the digital age.” —JH

All The News That’s Fit To Write