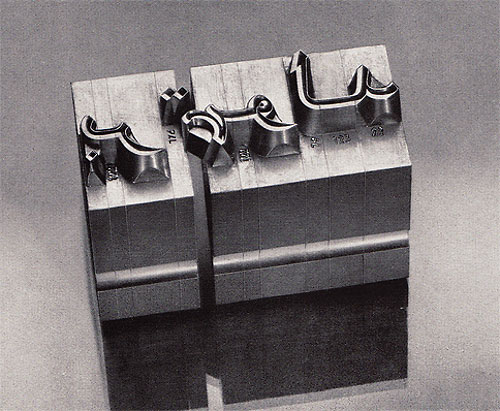 This publicity photo, from the Berthold foundry’s Specimen No. 525B (late 1950s?) shows the foundry type for Arabic Shaded No. 50. In addition to demonstrating the maker’s facility with both non-Latin scripts and elaborate ornamentation (this is an outline face with a drop shadow, produced at 30pt), this diagram shows an interesting technique for kerning Arabic’s many delicate features.

A kern, in the literal sense, is any part of a character that extends beyond the body. The more delicate a kern, the more likely it is to break off during use, and Arabic is among the world’s most sinewy scripts. To compensate, this typeface was cast with an especially long neck — the distance from the top-most printing surface (the face) to the non-printing surface below (the shoulder) — so that kerns would be stronger, and more fully supported by adjacent characters. A clever, simple solution.

Pop quiz: Arabic reads from right to left, and printing type is always reversed. Which end is the start of the line? If you’re disoriented, imagine the sixteenth century French and Flemish typefounders who produced some of the world’s finest Arabic typefaces, three hundred years before the invention of the mass-produced silvered-glass mirror. —JH

I love Typography (ILT), the world’s favorite fonts and typography blog/ And now you can buy fonts too

Mortal Enemy of the Hyphen