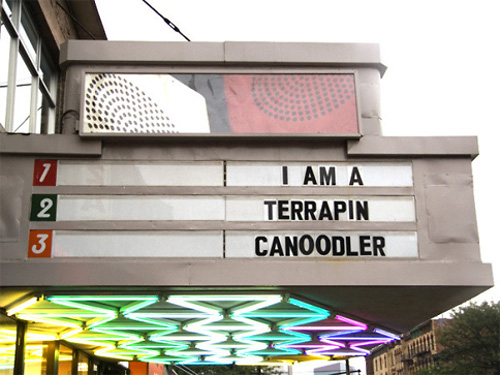 One of Andy’s photographs features his friend Albert walking before a giant FU on a Williamsburg sidewalk. “The letters used to spell out You Are Beautiful,” Andy explained, “before someone started moving them around the neighborhood…” It reminded me of a similar bit of guerilla anagramming in my neighborhood: a few years ago, our local movie theater finally gave up the ghost after 93 years. During the brief interregnum between tenants, someone had a few weeks of nighttime fun with the marquee.

For a while, I got most of my news from this sign, whether it was the looming SARS epidemic or the equally ominous appointment of Chief Justice Roberts. Jack Szwergold has collected them all on Flickr; the ones that make the least sense are among the most entertaining. —JH