The One Ill Building 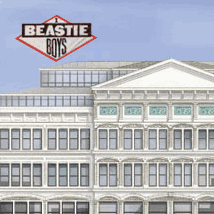 When I first saw the banner unfurled on Sixth Avenue, I figured The One Ill Building was a Beastie Boys’ foray into urban planning. (Long overdue, if you ask me: if Jade Jagger can be an architect’s muse, why not the King Ad-Rock?) If not a real estate development, then surely theoneillbuilding.com was promoting a documentary about sick building syndrome, narrated by, say, Al Gore.

Turns out it’s neither. So what is The One Ill Building?

In the early nineties, no interview with a typeface designer was complete without the obligatory question about “intercapping,” the practice of using a capital letter in the middle of a word. [The redacted conversation was always: Q: What do you think of intercapping? A: I have no opinion about intercapping.] Intercapping first became fashionable in the seventies as a branding gimmick, used to cherry up faded brand names: Compu-serv became CompuServe in 1977, Master Charge became MasterCard in 1979. In 1984, Apple cleverly used intercapping to promote the first suite of applications for the Macintosh: riffing on a genuine piece of Scottish onomatology (“Mac” means “son of” in Gaelic), programs like MacPaint, MacWrite, and MacDraw seemed as natural on the tongue as the surnames MacDuff, MacTavish, and MacAlpine. Programs produced outside of Apple followed suit, dropping the “Mac” prefix for trademark reasons (FullPaint, ComicWorks, PageMaker.) And by the end of the eighties, intercapping had become an established cliché for signifying anything that was high tech, as it remains today (PlayStation, TiVo, BlackBerry, LiveJournal, MySpace, YouTube…) Intercapping also proved an irresistable solution to the branding of mergers and acquisitions among equals, thus ExxonMobil, PriceWaterhouseCoopers, and the spectacularly Klingonesque GlaxoSmithKline.

So here we are in the twenty-first century, and intercapping is beginning to fall out of favor at the precise moment when it might actually prove useful. HTTP has become the lingua franca of commerce, and the pecked syntax of the URL profoundly affects the way we interact with brands. (Will brands like “AT&T” and “L’Oreal” forever retain their punctuation, once they’re chiefly experienced as att.com and loreal.com?) The good news for brands with compound names is that domain names are case-insensitive, so a URL styled theONeillBuilding.com will obligingly take users to the correct place. Suddenly, intercaps have a genuine purpose: invisible to machines, they aid human comprehension, which is ultimately the goal of all typography.

A few years ago, urban legends began to circulate about the accidentally funny URLs of Powergen Italia, Pen Island, and Therapist Finder (you do the math.) To this day, those hoping to connect with their favorite Hollywood starlets can do so at the alarming website whorepresents.com. All of these mixups could have been avoided — or amplified — by a little creative intercapping.

So along with mayonnaise, diesel engines, and high-waisted pants, we think it’s time to bring back the intercap. Give it a new name if it’s good for business (aioli worked wonders for the egg lobby): perhaps intercapping in 2008 will be about caseTransparency or serverBranding. If after all this you’re still uncertain about whether you prefer caps or lowercase letters, maybe it’s time for a graphic art sex change. —JH