The Timeless Typography of Harper’s Bazaar 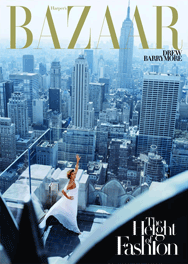 ASME has announced its winners for Best Cover of 2007, and we’re thrilled to see that of the six covers that feature typography, five are clients of H&Co. You’ll see Chronicle on the cover of O, and our forthcoming Sentinel font on the cover of Texas Monthly. But especially gratifying is the 2007 award for Best Fashion Cover, which went to Harper’s Bazaar: it was Bazaar who commissioned our HTF Didot typeface in 1992, and fifteen years later, they’re still winning awards with it.

The flagging magazine that Liz Tilberis and Fabien Baron reinvented in 1992 has earned a place as one of the most significant redesigns in modern history. It debuted with an iconic cover that ASME ranks as one of the top ten covers in history, memorable not only for its striking portrait of Linda Evangelista, but for its arrestingly simple typography: in a font commissioned to be as crisp as possible, there appeared the single headline “Enter the Era of Elegance.” In an age when it’s not uncommon to run the entire table of contents on the cover, this was a brave and startling move. It’s telling that this same strategy is still serving Bazaar after all these years, and it speaks to the strength of the magazine’s editorial vision and the thought that went into its typography. So thanks to Stephen Gan and Glenda Bailey for including us in your continuing tradition, and to Fabien Baron and the unforgettable Liz Tilberis for making us a part of this extraordinary institution. —JH