The World’s Most Perfect Script 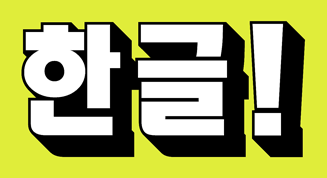 Typographically, the Republic of Korea has much to celebrate. The world’s first typefaces cast in metal were made in Korea: a fourteenth century book in the collection of the Bibliothèque Nationale de Paris establishes Korean printing from movable type at least as far back as 1377, though Korean typefounding may date to 1234, some 221 years before Gutenberg. An impediment to early printing was the complexity of Chinese characters, then used to render the Korean language, which further stifled national literacy. But in 1446, an undertaking by King Sejong the Great addressed both problems, through what is surely one of the greatest inventions in the history of typography: the Hangul alphabet. On October 9, Korea celebrates this incredible innovation as Korean Alphabet Day, better known as Hangul Day.

The invention and reform of alphabets has a long tradition, though its efforts are rarely successful. Generally speaking, script systems with highly scientific foundations go completely unrecognized, the typographic equivalent of Esperanto. And among the world’s most successful script systems are some of its most arbitrary: nothing in the design of the Latin A suggests its sound or meaning, and even scripts with pictographic origins such as Chinese are usually abstracted to the point of unrecognizability. But Hangul, Korea’s “Great Script,” is perhaps history’s only effort at alphabet reform that is both scientifically rigorous and universally successful. As a result of careful planning, Hangul is easily learned, comfortably written, and infinitely flexible.

Hangul is comprised of 51 jamo, or phomenic units, whose shapes are highly organized. Simple consonants are linear (ㄱ, ㄴ, ㄷ, ㄹ, ㅁ, ㅂ, ㅅ, ㅇ, ㅈ, ㅊ, ㅋ, ㅌ, ㅍ, ㅎ), vowels are horizontal or vertical lines (ㅏ, ㅓ, ㅗ, ㅜ, ㅡ, ㅣ), glottalized letters are doubled (ㄲ, ㄸ, ㅃ, ㅆ, ㅉ), and so on. But more interestingly, Hangul’s characters are featural: their shapes are related to the sounds they symbolize, each representing a different position of the mouth and tongue. Pay attention to the curvature of your lower lip when you form the sounds buh and puh, and you’ll begin to see the logic of Hangul’s B (ㅂ) and P (ㅍ). Notice how your tongue interacts with the roof of your mouth when you say sss and juh, and you’ll understand the design of its S (ㅅ) and J (ㅈ). Hangul’s ability to represent an especially wide range of sounds makes it easy to render loan words from other languages, a challenge in many Asian scripts (but an entertaining hazard to reckless Westerners.) Typographically, I envy my Korean counterparts who get to work with Hangul, with its letterforms that always fit into a square, and can be read in any direction (horizontally or vertically.) And best of all: no kerning! —JH