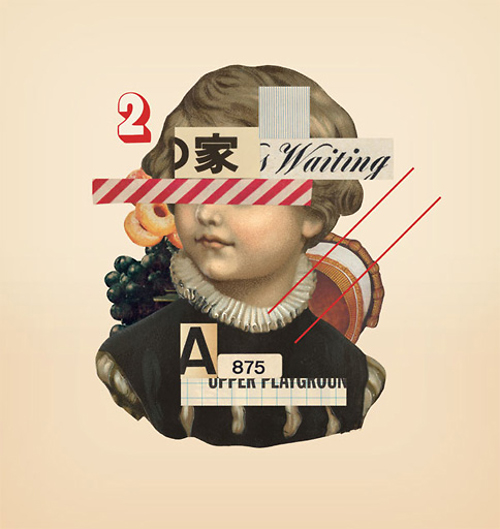 I’ve always had a thing for collage. If I was more highfalutin, I’d claim some childhood fascination with Joseph Cornell or James Rosenquist — both of whom I love, but didn’t discover until adulthood. The truth is that I probably developed a taste for collage listening to The Pixies, and reveling in all those magnificent album covers designed by Vaughan Oliver. Oliver’s work for the record label 4AD was for me an incandescent highlight of the early nineties, and his enigmatic album covers for The Cocteau Twins, Dead Can Dance and Le Mystère des Voix Bulgares always left me shaking my head in wonder, asking “where does this come from?” Sometimes the music inside would echo an answer.

One of Oliver’s regular collaborators was the Japanese collage artist Shinro Ohtake, whose work came to define the art form for me. His incorporation of type made his work irresistible to a typographer; I archly enjoyed watching it come full circle, as his works of fine art gradually came to be used as pieces of commercial art themselves. (The Bill Laswell album Seven Souls uses an Ohtake collage, full and unaltered, for its cover.) Because collages pose an energetic dialogue between high and low art, they’ve always been fertile ground for graphic designers, as demonstrated by the dominating “Knopf style” of the nineties. Knopf designers Carol Carson, Barbara de Wilde, Archie Ferguson and Chip Kidd proved two things: first, that collage was not only dynamic and intriguing, but inviting and literary; second, that it required a dab hand. Things that look easy have a way of being difficult to do well.

Wandering online this weekend, I came across the site of Eduardo Recife, whose work includes the piece I’ve reproduced above. To me, this is what collage aspires to be: a motley company of ordinary performers choreographed into something that expresses the ineffable. I especially admire Recife’s ability to crash incongruous elements with elegance and wit (q.v. the donuts, above), as well as his egalitarian affection for all kinds of typography, from engravings to parking tickets. Spend some time with Recife’s work this afternoon: it’s a delight. —JH