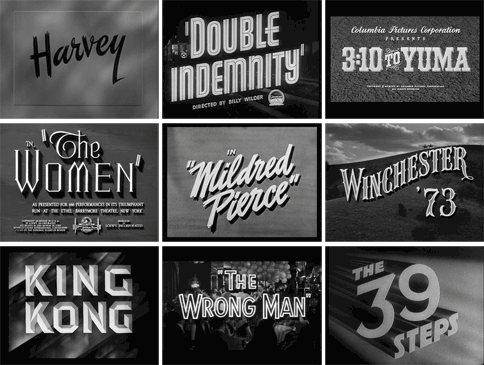 Changing fashions in movie titles are one of the richest veins in typography’s fossil record. On his website, graphic designer Christian Annyas has put together a nice collection of movie title stills — both opening and end credits — offering a handy synopsis of twentieth century lettering. Rather than an exhaustive survey, Annyas has curated a small and personal collection that’s conveniently organized by decade: dipping into any period offers a convenient way of getting a taste for the lettering of the era.

Keep an eye out for “in-camera” lettering, in which lettering is incorporated into on-screen props. The book in Jeux Interdits uses a popular trope; the telephone in Dial M for Murder and the playing cards of Le Roman d’un Tricheur have become classics. Truly stirring is the occasional title that feels jarringly modern: The Fly has the sort of purposeful unease that still strikes a chill, fifty-one years later. —JH

10 Years of Fonts In Use