I pretty much agree with Anil Dash on the topic of wacky April Fools’ jokes for websites, so instead I thought that today might be a good day to share a piece of genuine idiocy from the archives.

By the time Tobias and I began working together in 1999, we'd been friends for a decade, and had spent most of the previous years in close contact by phone. Our biographers will report this as a period of august correspondence in which we developed the philosophical framework that would inform our later collaboration, but the truth is that much of this time was spent goofing off, and naturally the arrival of the internet helped this project immensely.

Since we’d always been the types to tackle exhaustive projects, we both spent most of the nineties utterly exhausted. Many of our late night conversations were wits-end grievances about the impossibility of doing something or other, and these commonly degenerated into a discussion of Dumb Ideas for Typefaces. One of these, which I suggested in 1995, was that the OCR-A font — used on bank statements and designed for optical character recognition — really needed to be outfitted with a set of swashes. Using Adobe Illustrator, I ginned up the image above in about ten minutes, and sent it to Tobias. His response, which arrived within the hour, was a file named ¡¡¡Estupido-Espezial!!!.sit, which contained the following: 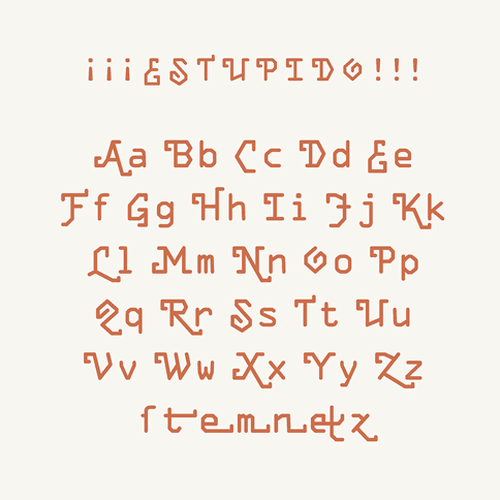 The full set of swashes are nice, but for me it’s the archaic long s that really takes it home.

I tacked this specimen of Estupido Espezial!!! to my wall, where it immediately became a litmus test for visitors. Most people would say nothing, but woe be unto anyone who admired the thing in earnest: “hey, cool font!” would immediately land any visitor on the Suspicious Persons list. The best were those who would stare for a moment with bafflement before bursting out laughing, a few of whom became good friends, good clients, or both. Unique among these was my friend Eric Siry, himself late of The Hoefler Type Foundry and by then working at Rolling Stone, where he had soberly convinced the magazine to license Estupido for an upcoming issue. “Get yourself a copy of OCR-A, and Estupido’s yours for five hundred bucks,” I must have said, for a few weeks later I received a check from Wenner Media.

To this day it’s unclear whether Eric had recommended the font with or without irony — he’s tight-lipped on the subject — but a few months later appeared the Rolling Stone Technology Issue, its entire feature well brilliantly festooned with the font’s nightmarish tentacles. I knew that Tobias would be deeply horrified that our antics had seen the light of day, and wondered about the best way to break the news to him; after much thought, I decided that the best way would be to tell him immediately before he went on stage at the AIGA National Conference in New Orleans.

Knowing that the two of us were scheduled to appear together on a panel discussion, I’d come to New Orleans with three numbered envelopes for Tobias. The first contained a check for $250, offered without explanation, at which he arched an eyebrow. At the second envelope, all the color drained from his face, as it contained a copy of a license to Rolling Stone for “one-time use of the typeface Estupido Espezial.” The third envelope, of course, contained a copy of the issue itself, its pages annotated by hundreds of tiny Sign Here flags signalling the most delightful of its many typographic atrocities. During the Q&A session after the talk, I noticed Tobias staring intently into a notebook, and I thought for a moment that he was shaking his head in consternation. Later I learned that he was drawing the following, the final chapter in the Estupido saga. —JH

Collection of the Day