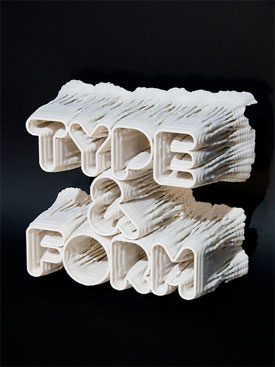 Taking a break from my top secret Independence Day project that combines typography and patriotism (more about this later), I came across something marvelous that I had to share.

The August 2008 issue of Print has this arresting image on the cover. I recognized that the typography grew out of our Gotham Rounded font, which is the magazine’s signature typeface, and had assumed that this treatment was a clever and curious bit of digital rendering on someone’s part. It is and it isn’t: designer Karsten Schmidt used software of his own devising to give Gotham Rounded’s polished letterforms these intriguingly organic roots (using a branch of mathematical modeling called reaction diffusion) but then fed these digital inputs into a 3-D “printer” in order to produce a physical object.

I’m fascinated by 3-D printers (read: want one.) They’re essentially inkjet printers, but instead of rendering an image using a grid of ink splatters on a page, they produce successive cross-sections of an object by strategically injecting liquid binder into a polymer powder. Taken together, these high-resolution cross-sections form a dimensional object, like the one Schmidt produced here. Print is running an article describing the making of the cover, and its designer has detailed the entire process, step-by-step, in this illuminating Flickr set. Check it out! —JH

Use Fonts in Email

The Timeless Typography of Harper’s Bazaar