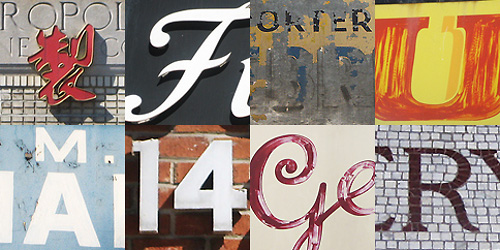 For those of you who missed last weekend’s AIGA/NY Typographic Walking Tour, designer Karen Horton has uploaded a Flickr set containing some of the highlights. There are a couple of treasures here that aren’t to be missed, including at least one rare architectural palimpsest that won’t be visible for long. (Demolition in the city regularly exposes sudden windows into the the past, as in 1998 when Times Square was suddenly home to a 121-year-old advertisement for “J. A. Keal’s Carriage Manufactory,” painted in 1877.) Some of the lettering on the type tour is older still, and some of the newer signs may find themselves covered up by adjacent construction. So catch them while you can, or wait another 121 years to see if they resurface in 2128. —JH