In my very first meeting with director Brian Oakes, we agreed that our episode of the Netflix documentary Abstract: The Art of Design should be more than a profile of a working typeface designer: it should also offer viewers some practical insights into the mechanics of the craft itself. I loved Brian’s idea of periodically cutting away from the narrative to offer little lessons, and we both felt that manipulating physical props on a soundstage, rather than using computer animation, would be the most compelling way of demonstrating typographic principles.

The three resulting segments, titled These Are Letters! and heralded by an impish jingle, are the result. For the chapter about optical illusions, I wrote and storyboarded ten different examples, though in the end we whittled these down to a leaner set of four. Since a number of people who teach design have suggested that we manufacture these for use in the classroom, I thought I’d take the more direct approach, and make them available as a free download, as a PDF that can be printed on transparencies. This also felt like a good moment to publish the six additional lessons that didn’t make the cut, which are illustrated below. Whether you’re teaching typography, studying it, or just giving letters a closer look for the first time, I hope you’ll find these useful. —JH 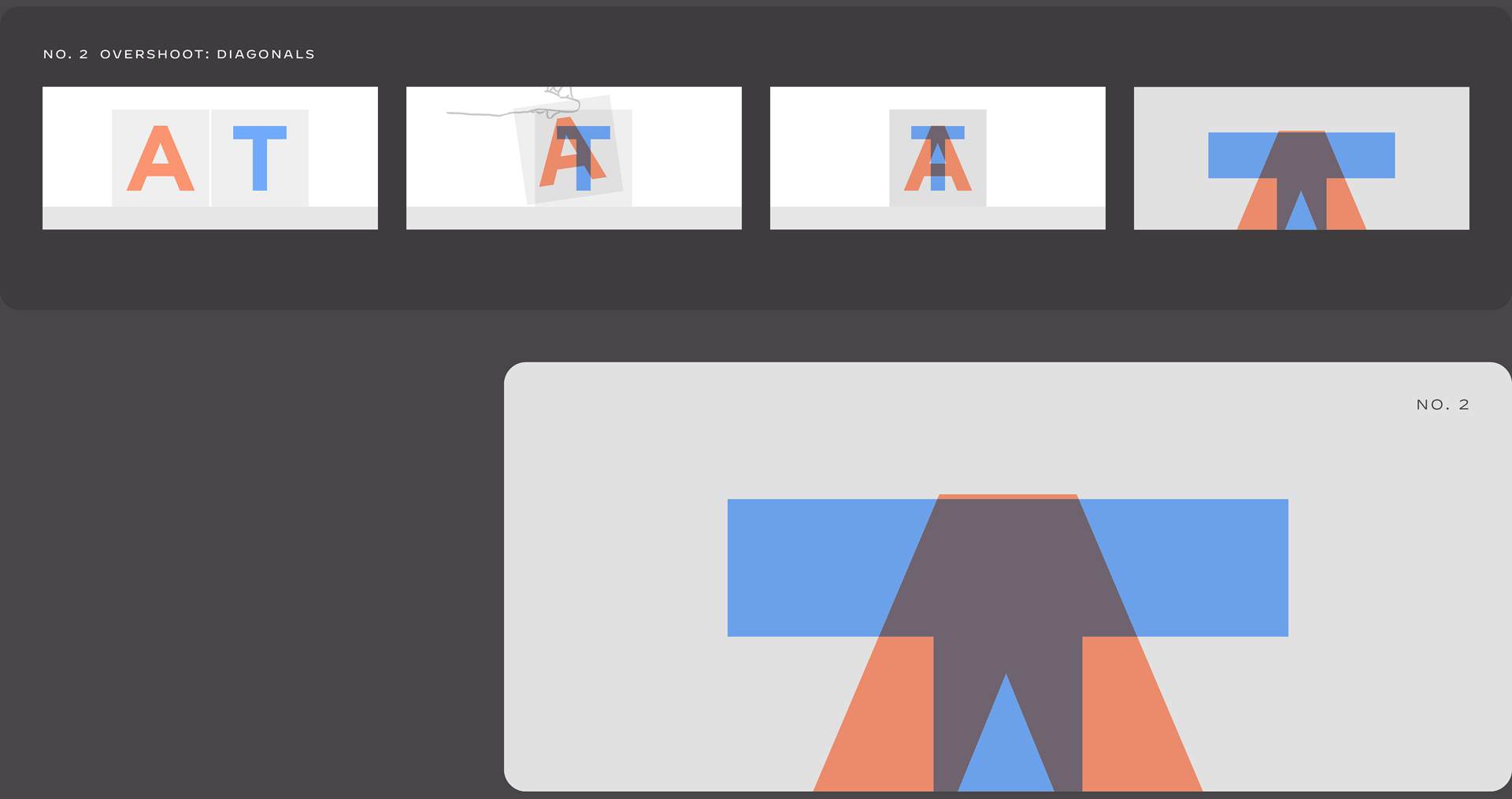 No. 1. Type design is a battle with optical illusions, which we only win through a complete surrender. We convince the eye to see things clearly not by creating rational drawings, but through irrational ones, by introducing strange distortions that outwit the eye: to shape not what we see, but what we think we see.

Even the alphabet’s simplest goals begin with some unexpected accommodations. Making all the letters appear the same height means drawing round characters to be measurably taller than flat ones, to counter our physiological tendency to see circles as smaller than squares of the same height. In a typeface, letters that are round at the top or bottom (such as this C) will need to project beyond the height of the flat letters (such as T), by an amount that type designers call “overshoot.” Overshoot will apply throughout the character set, to the lowercase, numbers, symbols, and punctuation — and devilishly, it won’t always have the same measurement. It’s not uncommon for the overshoot of an S and an O to differ, dictated only by how things appear to the eye. 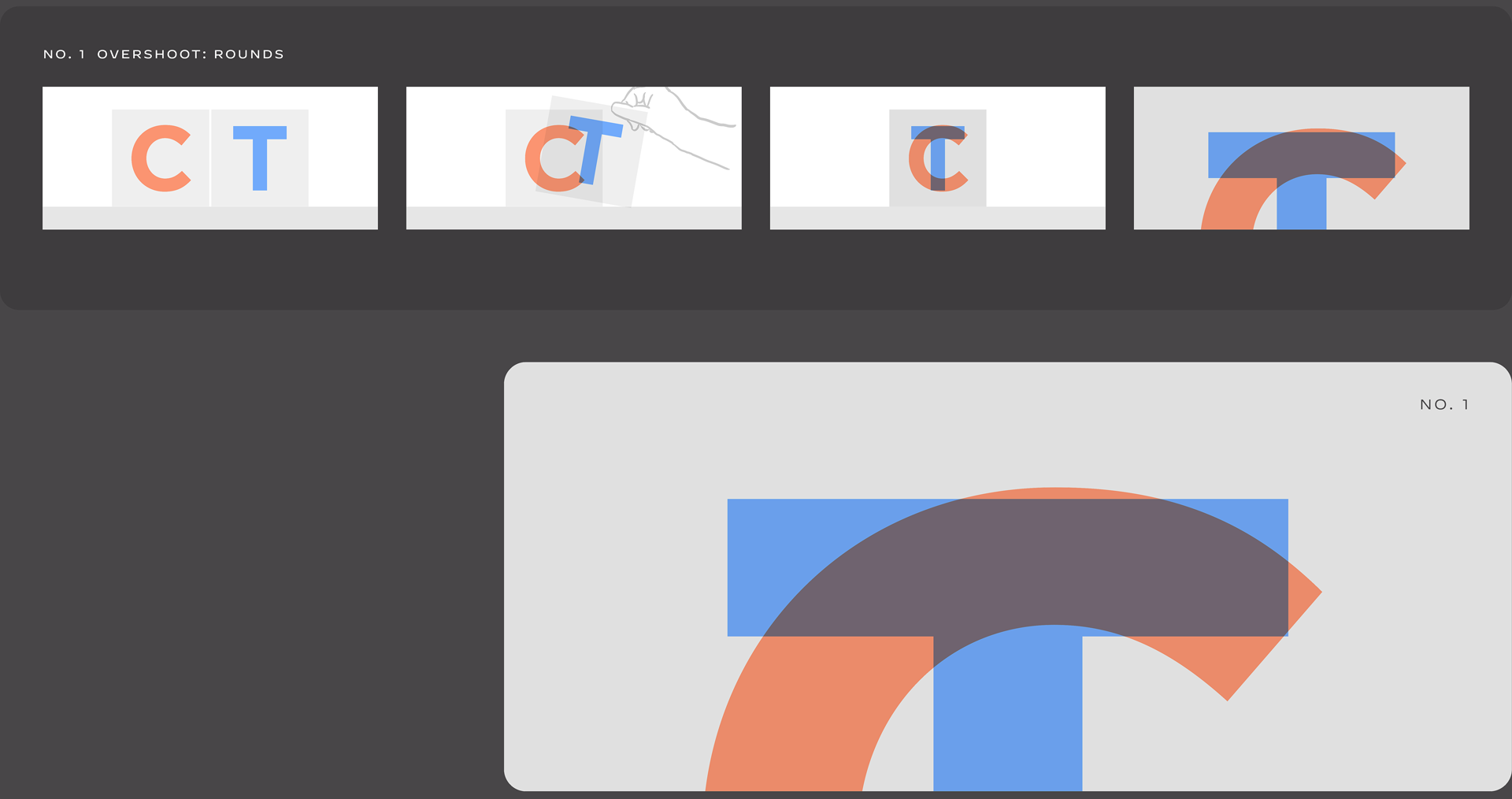 No. 2. Our misperception about circles and squares extends to triangles, too: letters whose strokes converge into a point are prone to appear smaller than they actually are. So type designers customarily apply some degree of overshoot to diagonal letters like A, V, and W, and often, if the design calls for especially sharp corners, the acute points of the letters N and M as well. 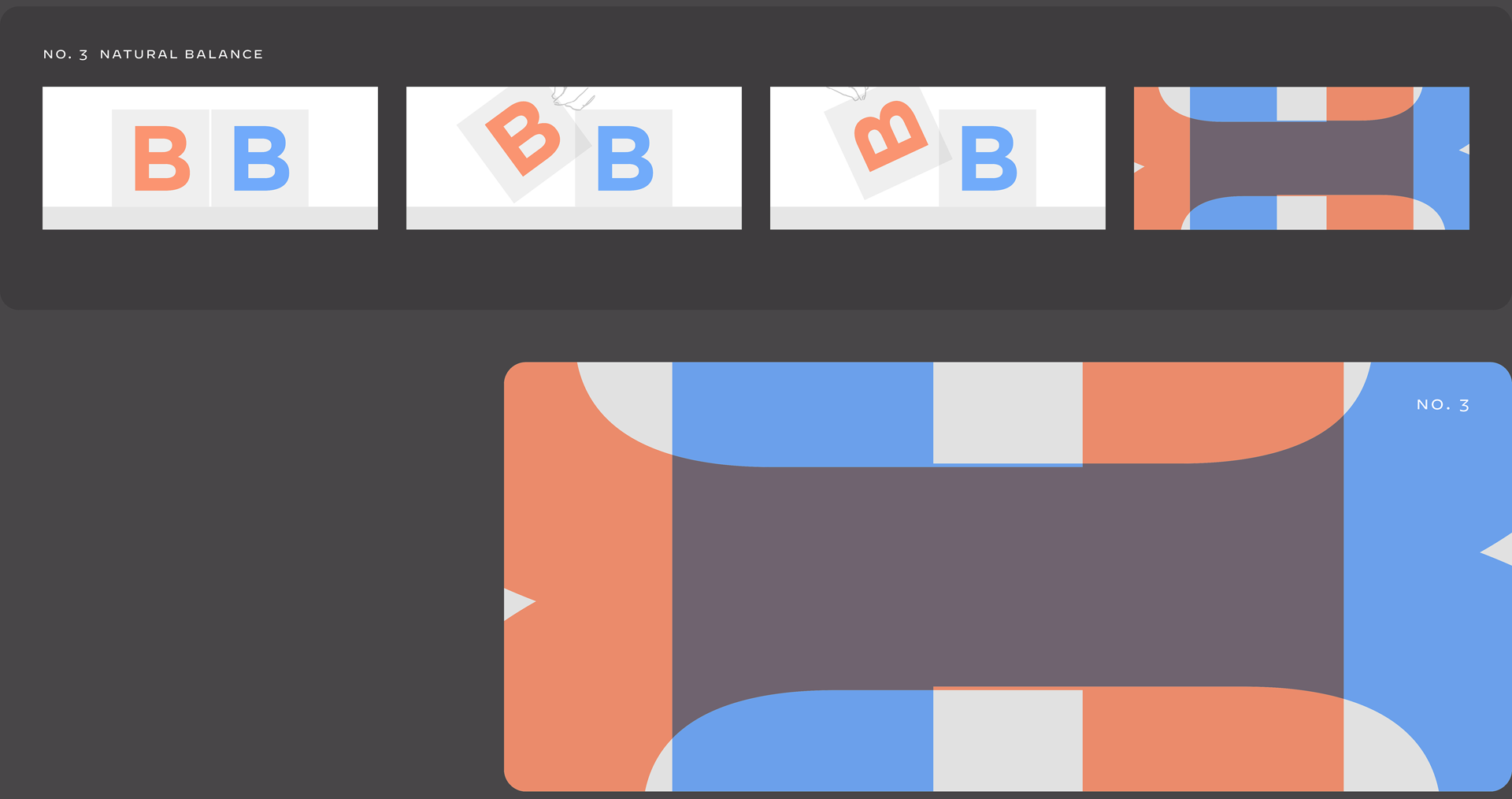 No. 3. Another thing we consistently misjudge is balance. This may be a vestige of how humans have evolved to process the physical environment, intuitively recognizing that remote objects appear smaller than those nearby. Applied to typography, it means that making a letterform appear equally balanced requires drawing it to be measurably smaller on top. These expectations about “natural balance” are at work in letters like B, E, and S, which are visibly smaller above and larger below — and even in the letter H, which in order to appear symmetrical, needs a crossbar that’s just above center. 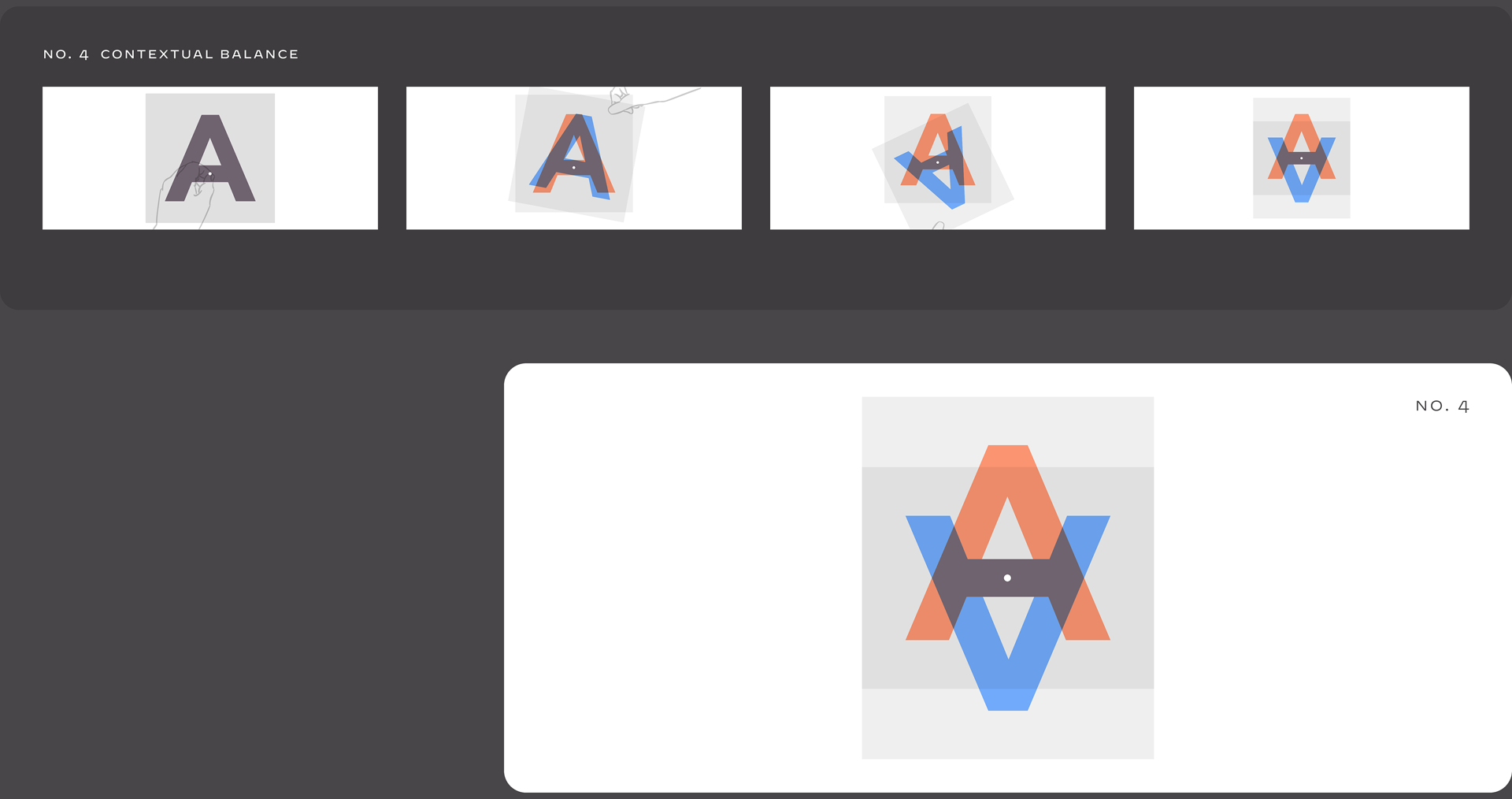 No. 4. Curiously, a letterform’s construction can also influence how we perceive its equilibrium. Take the letter A, whose most basic recipe is “a delta with a horizontal bar in the center.” By rotating this letter about the center of the crossbar, we can see just how far below center this waistline really is. This is because perception is subject to context, and for the bar of the A, what we perceive as its relevant context isn’t the entire letter, it’s the much smaller region that’s inside the delta. 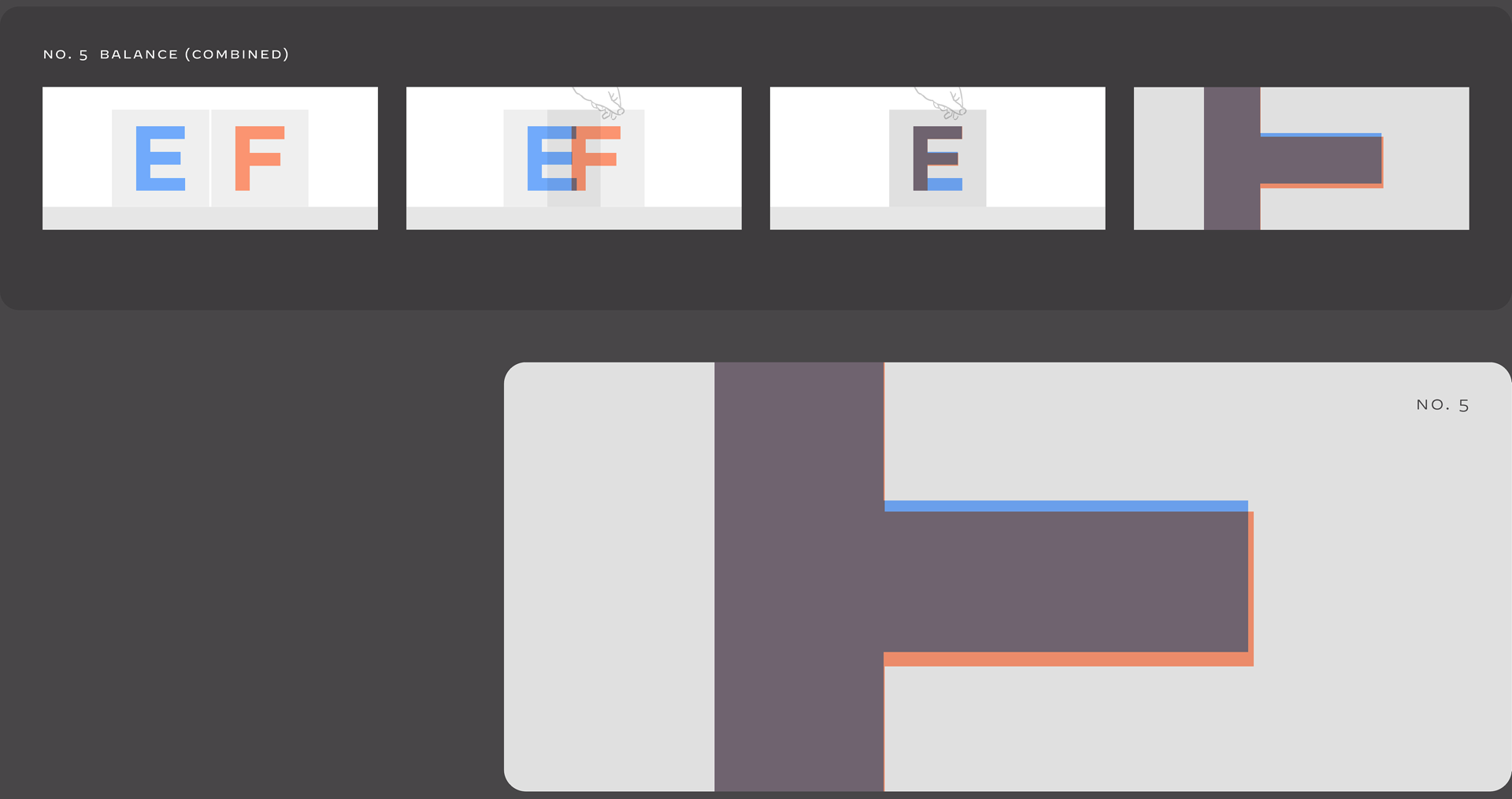 No. 5. Both kinds of typographic balance combine unexpectedly in the letters E and F, whose center arms appear identical, but in fact almost never align. Following what we know about natural balance, the arm of the E will be positioned just above center, in order to appear equidistant from the two other strokes. But owing to its relevant context, the arm of the F will be centered not on the height of the character, but in the void between the underside of the top stroke, and the empty bottom of the letter — making it lower than the arm of the E, its fraternal twin. Often, the arrangement of the F is a compromise between what its own construction suggests, and its need for compatibility with the frequently adjacent letter E. 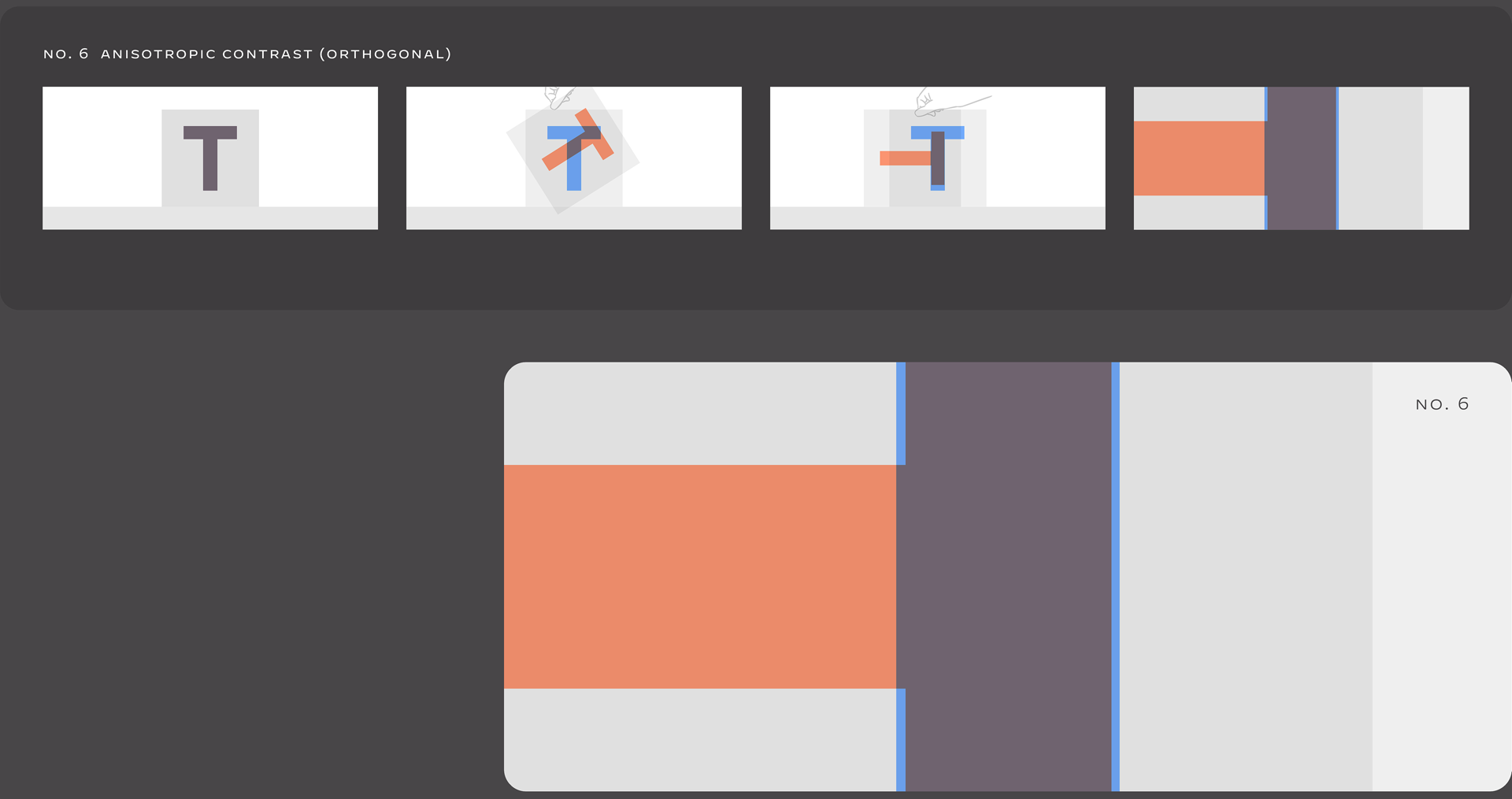 No. 6. The simple letter T conceals one of typography’s great paradoxes: that lines appear thicker when oriented horizontally than vertically. Type designers call this property “contrast,” and because it behaves differently in different directions, it’s said to be “anisotropic.” To create letterforms that appear to have a consistent weight throughout, a type designer will make sure that vertical strokes are measurably thicker than horizontal ones; diagonal strokes, therefore, will fall somewhere in between. 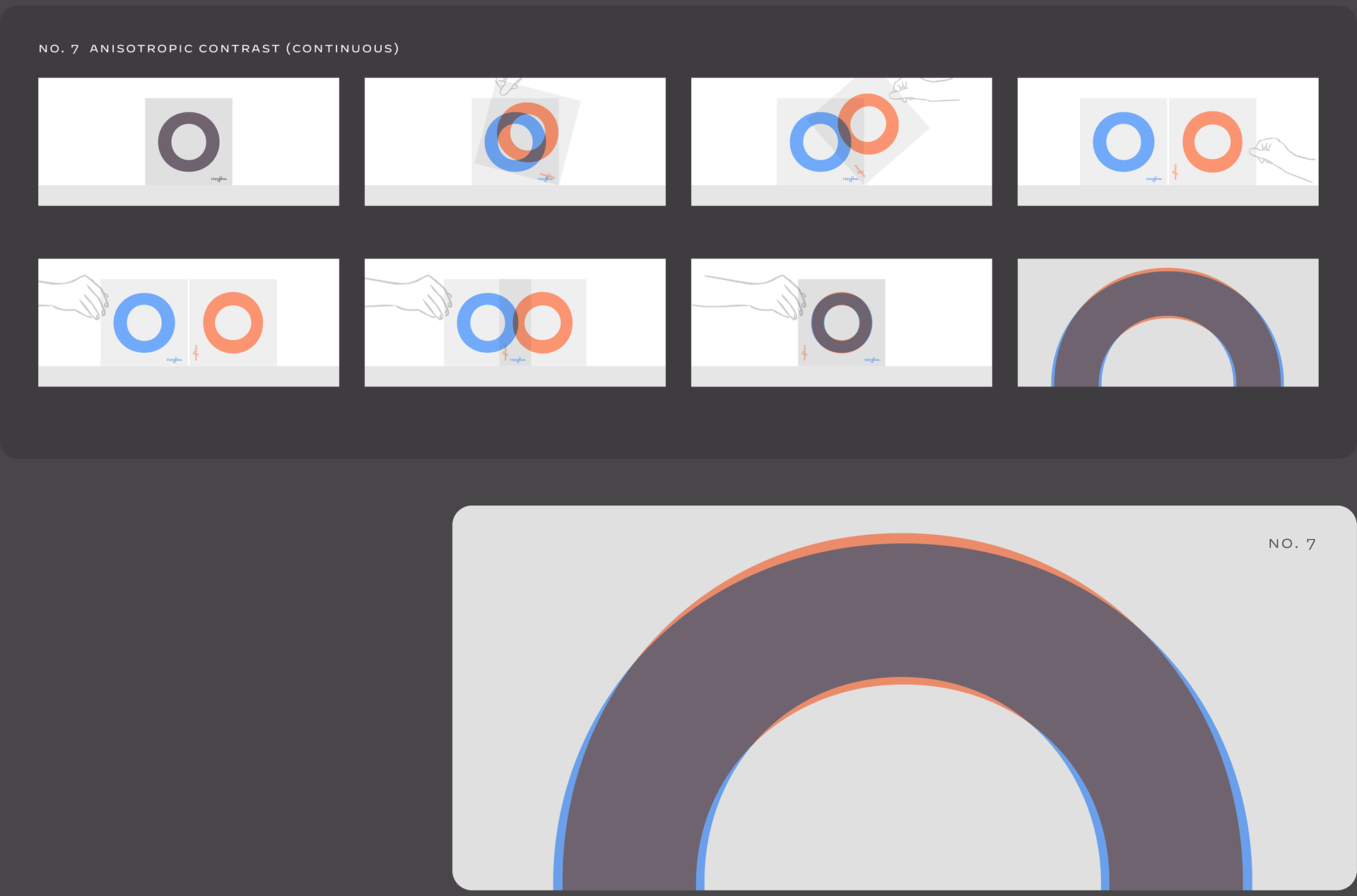 No. 7. Anisotropic contrast affects not only weight, but also dimension: just as we perceive horizontal strokes to be thicker than they really are, we perceive horizontal distances to be longer than they actually are. To create what appears to be a perfect circle or a perfect square, a type designer will create a shape that’s measurably narrower than it is tall. Looking at the letter O, we can see two effects of anisotropic contrast at once: in its normal orientation, the stroke weight becomes steadily thinner as it reaches the top and bottom of the letter, and the letterform itself is taller than it is wide. 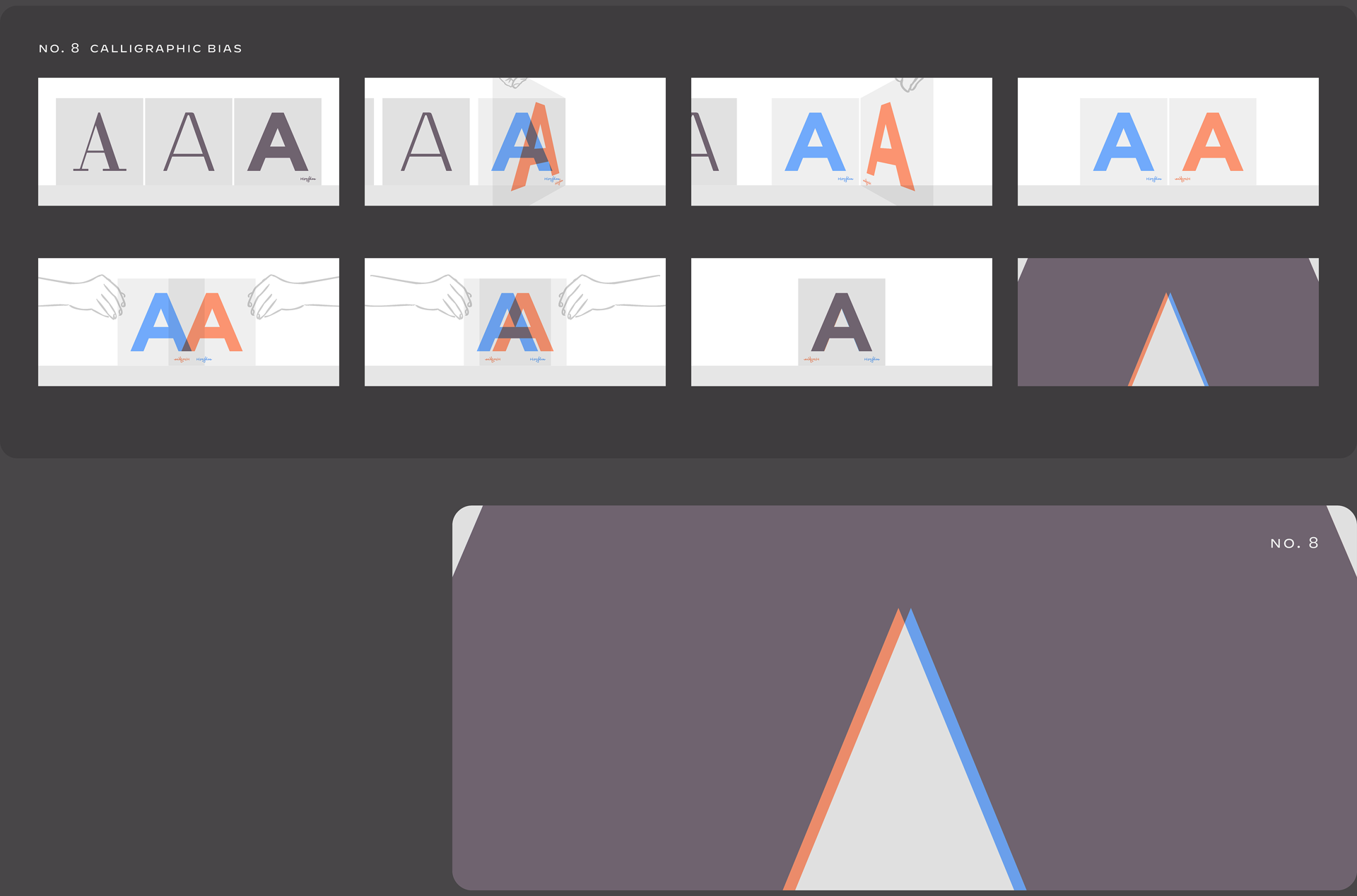 No. 8. Complicating the way we perceive weight is the “calligraphic bias” that’s implicit in the Latin alphabet itself. The very shapes of our letters are the product of the broad-edged pen, held at an oblique angle in the right hand, which, as it moves rightward, produces thin upstrokes and thick downstrokes. This pattern of thins and thicks is apparent in many of the typefaces we read every day, but it’s also imperceptibly fossilized in even the most evenly-weighted design. Looking at a mirror image of the letter A reveals that its left leg is subtly lighter than its right, a necessary maneuver to satisfy our subliminal expectations about weight — all the consequence of ancient right-handed scribes. 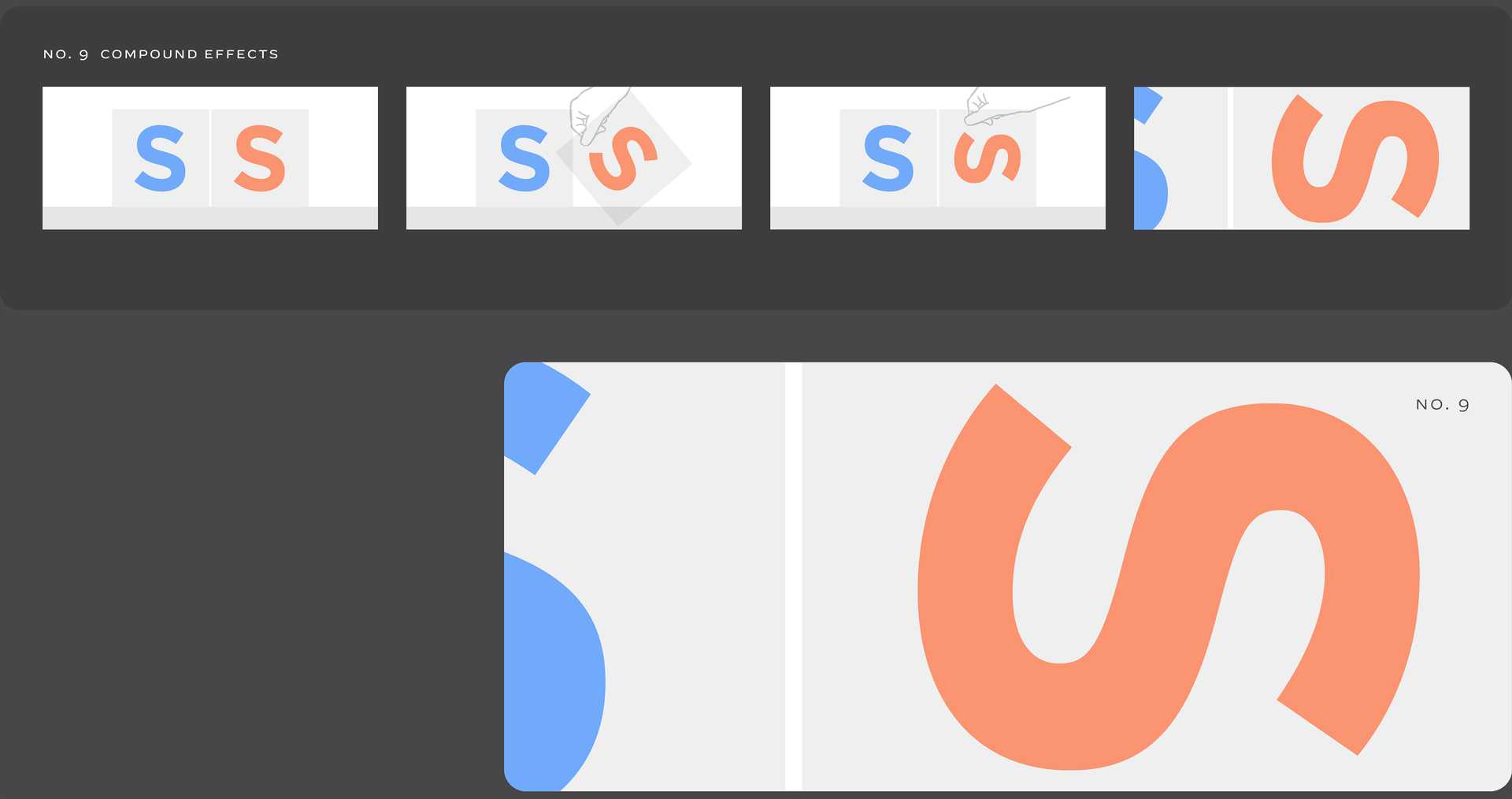 No. 9. To see all of these phenomena at work, look no further than the letter S: it only takes viewing the letter from a different angle to reveal all the sleight-of-hand that goes into making it appear balanced. Turning the S clockwise reveals the different proportions of its top and bottom halves, a necessity to maintain natural balance. In this orientation, the ends of the strokes appear to flare outward, a consequence of the anisotropic contrast that causes weights to thicken as they approach verticality. 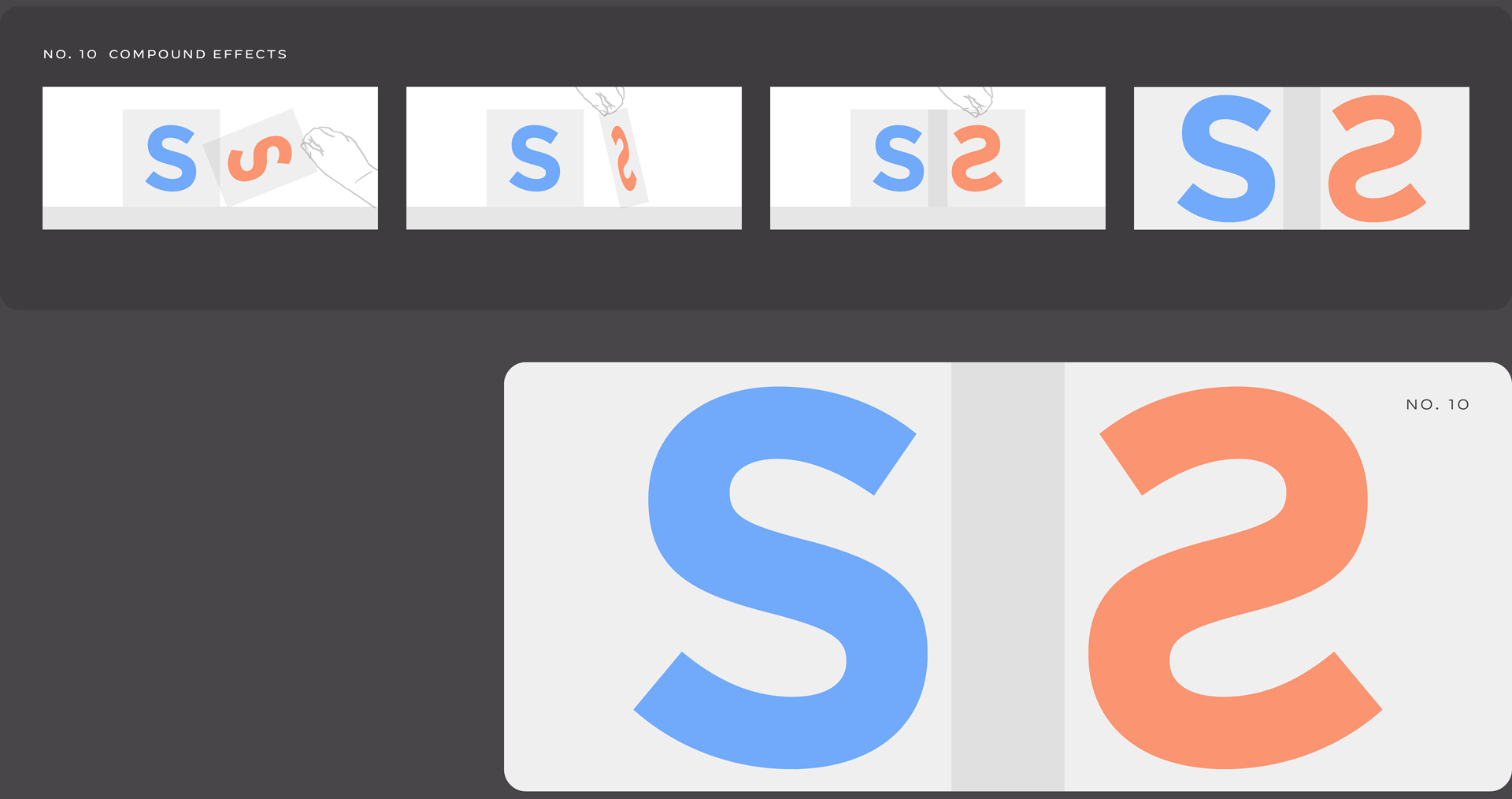 No. 10. Looking at its mirror image reveals an additional illusion: that the S is considerably thicker in the middle than above or below, a consequence of the calligraphic bias that expects downward strokes to be the heaviest. Nowhere is this more dramatic than in its lower left quarter, where the letter’s heavy spine rapidly thins out as it approaches the baseline, the combined effects of anisotropic contrast and calligraphic bias that are both undetectable in its normal orientation. —JH

Font suggestions for those tired of Times New Roman.