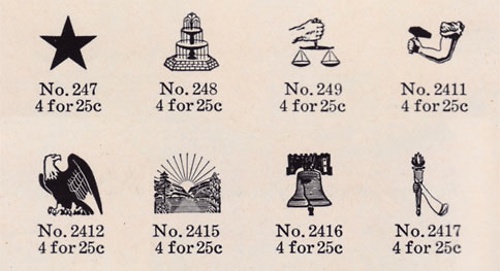 Those who suspect that Republican iconography will show the same mastery of political organization as the rest of that party are correct: Republican candidates are always signified by an elephant, except inside voting booths in Indiana, New York, and West Virginia, where an eagle is used instead. And in these states, as well as the 47 others, the eagle is also the national symbol of the United States itself.

The Chicago typefoundry of Barnhart Brothers & Spindler showed these “Election Typecuts” in their Catalog 25-A, published around 1930, and 78 years later I think my district is still using this same art. Cheerily Barnhart Brothers accompanied their samples with this legend:

When changes in the political situation — the birth of new parties, revision of election laws, or other causes call for new emblems or characters other than shown above, our facilities enable us to produce the material promptly at moderate cost.