What’s in a Font Name 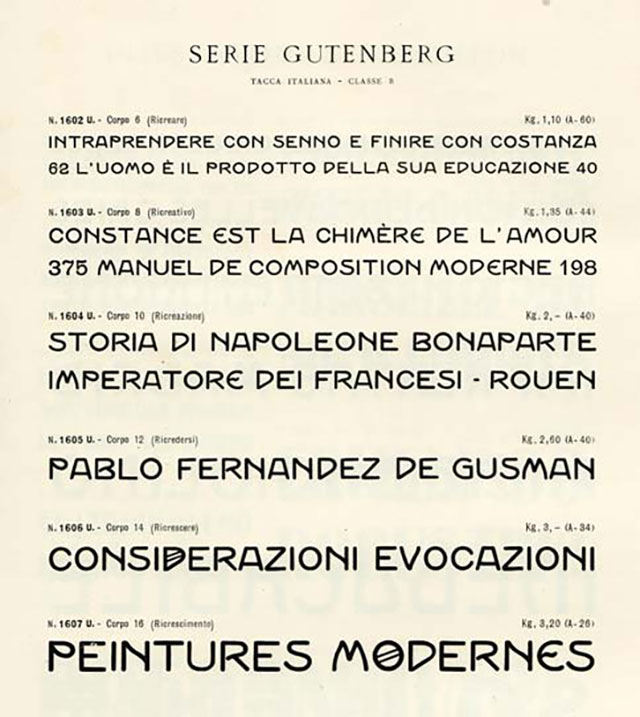 For as long as fonts have had names, they’ve had bad names. Historical inaccuracies have been common for two hundred years: typefounders of the Industrial Revolution groped for historical labels to apply to newly-invented styles (Egyptian, Gothic, etc.), and it wasn’t long before typefaces began to bear the recognizable names of unrelated historical figures. Alongside the very un-Dutch Series Rembrandt, a nineteenth century French specimen book shows the Series Victor Hugo, unconnected with the author but doubtless hoping to cash in on his celebrity; Hugo was still alive at the time.

But most entertaining are faces like this one, which honor prominent figures from typography’s own history. This charming face is from the 1928 type specimen of the Nebiolo foundry in Torino, and here we have a typeface full of Art Nouveau vigor, fresh from the window of a chic gelateria, or a cinema marquee. And what famous early twentieth century figure is it named after? Why, Johannes Gutenberg of course (d. 1468), father of movable type. Can’t you just see Gutenberg stepping out of his Fiat gp racer, his handsome olive complexion set off by a rakish tweed cap?

It seems that most of the world’s typefounders have suffered this cruel fate. Here are some especially juicy mistreatments. 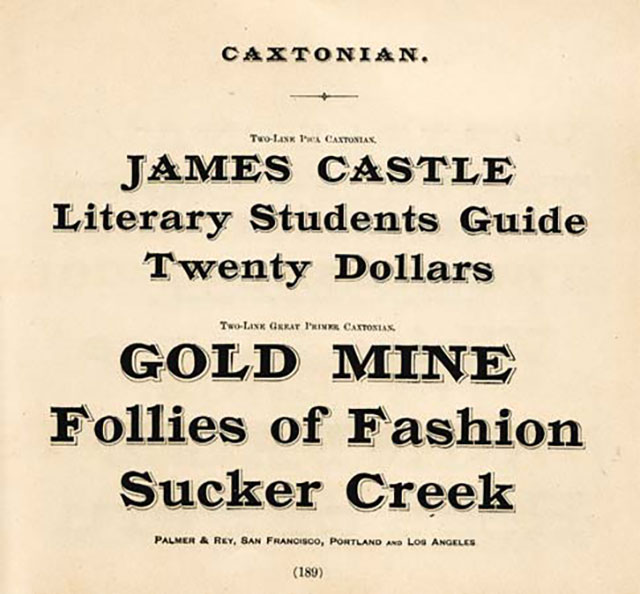 This is the Caxtonian typeface, produced by the San Francisco type foundry of Palmer & Rey, and appearing in their 1889 catalog. Its name presumably honors William Caxton (c. 1415–1492), best remembered as England’s first printer, though this design suggests a gold rush pioneer, or a Dodge City vaudevillian. (Or perhaps your local watering hole has Caxtonian Stout on tap?)

Moving along through type history, we come to Claude Garamond, the great French typefounder of the sixteenth century, immortalized here by the Fonderie Typographique Française around 1920: 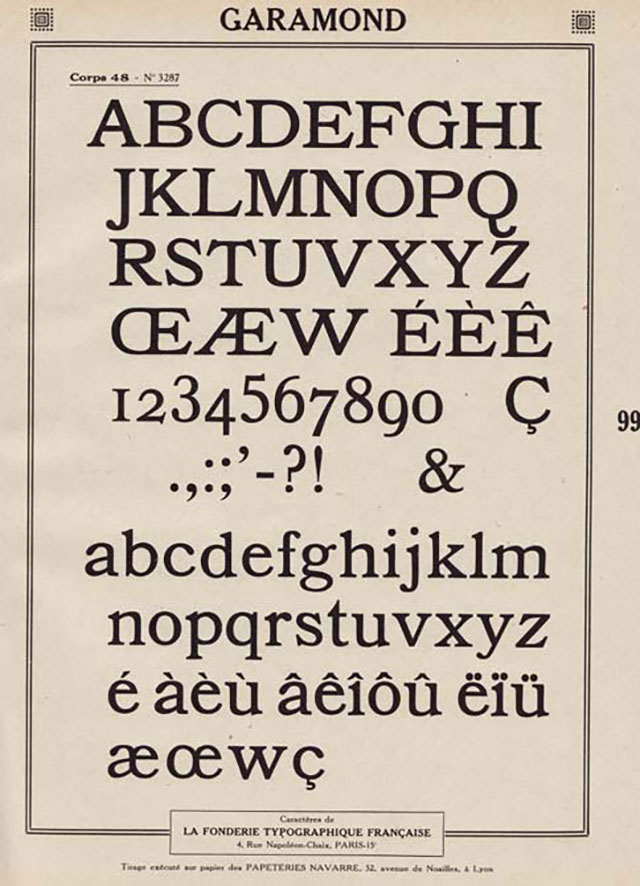 Garamond’s name has long been surrounded by a scholarly fug — there are many typefaces called “Garamond” which unwittingly revive the work of other typefounders, from Robert Granjon to Jean Jannon. But this is beyond the pale: here in the Album d’Alphabets is the proud declaration “garamond,” atop a showing of the late ninteenth century American typeface known today as Bookman. I’d love to use this face for the cover of an album called “Berlioz,” which contains nothing but marches by John Phillips Sousa.

The eighteenth century printer-typefounder John Baskerville lent his name to a number of solid revivals, none of which includes: 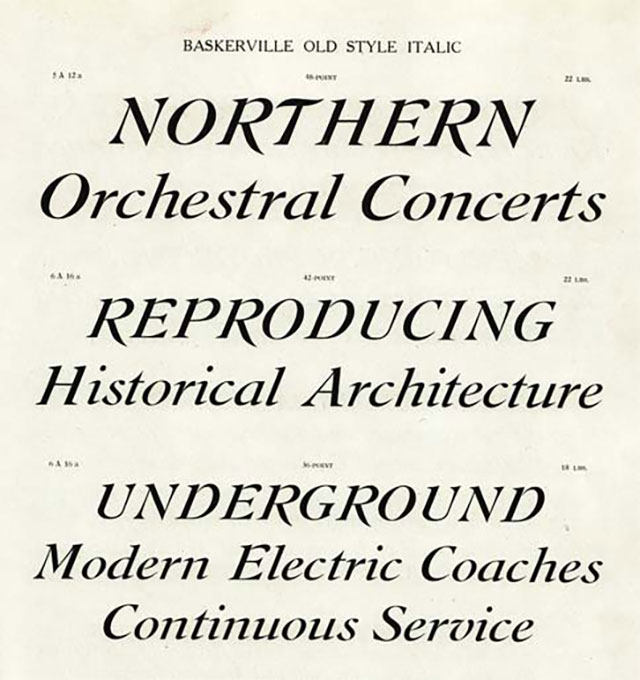 Baskerville’s chief contribution to typography was the introduction of gestures from engraving, which gradually moved letterforms away from calligraphy and toward rationalism. The swooshy business above, taken from the 1919 specimen of the Caslon typefoundry, represents the very opposite of Baskerville’s approach, like a thatched cottage attributed to Mies Van der Rohe. In an offhanded moment, Roger Black once called this face “Caslon for lovers,” which pretty much retires the trophy for withering typographic sobriquets.

Of course, not to be outdone by the British, 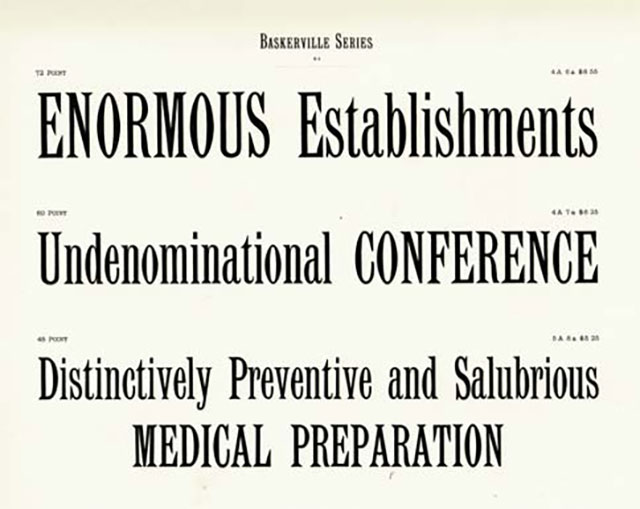 Here’s “Baskerville” rendered by the American Type Founders company (atf), as shown in their type specimen book of 1896. Like the Garamond-that-eats-like-a-Bookman, this is simply the Latin Elongated typeface billed as “Baskerville,” for reasons unfathomable. (It couldn’t have been a very successful marketing gimmick: as well known as the name “Baskerville” was the style behind it, so I can’t imagine this label fooling anyone.) I’m reminded of Jack Summerford’s fantastic Helvetica T-Shirt, though unlike Summerford, I doubt atf was in on the joke.

Finally, here in the 1888 specimen book of the Cincinnati foundry, we have an American adaptation of the work of the Neoclassical giant, Firmin Didot: 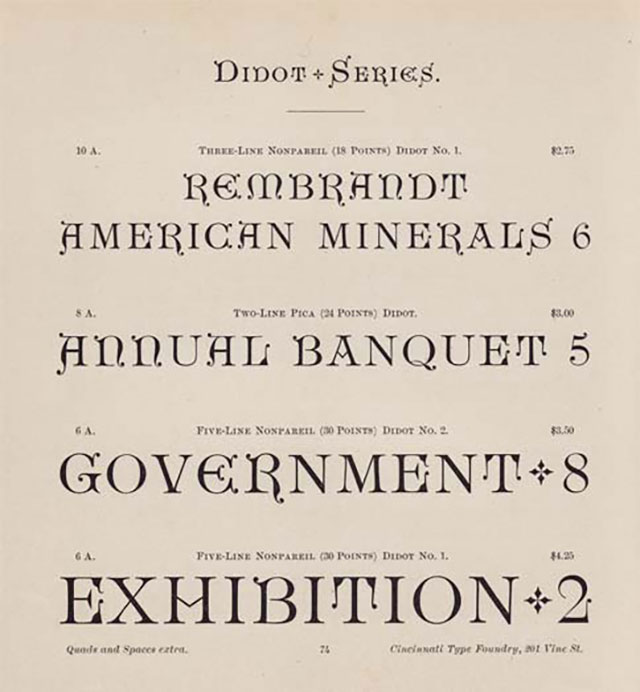 Having done my own Didot revival some years ago, I think I can safely say that our two different approaches suggest ample opportunity for further exploration. —JH